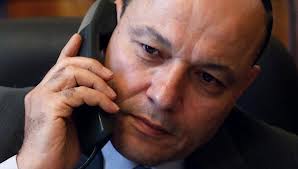 The newly-appointed Prosecutor General Tala’at Abdallah has ordered an investigation into accusations of treason laid against main opposition figures Hamdeen Sabahy, Amr Moussa and Mohamed ElBaradei. The investigation commenced on Thursday and was initially filed by two lawyers earlier in December after President Mohamed Morsy’s constitutional decree was widely criticised by his political opponents.

According to state-run news agency MENA, the trio was accused with “incitement to overthrow the government” which is tantamount to high treason. According to Egypt’s penal code high treason can be punishable by death or imprisonment and exclusion from all aspects of political life for a given period of time.

Yasmin Hosam, a lawyer at the Egyptian Initiative for Personal Rights said that although the death penalty can be given out, there was no sufficient evidence in this case to meet the conditions for treason. “There are specific cases in law that can warrant a death penalty but there is no case here,” she said, adding that the investigation is politically motivated and meant to damage their reputation. “Many people in Egypt will believe these things and it will have a positive effect on their opinion of the government.”

Hosam added that the prosecutor general has legally done his job by launching an investigation but could, and should, close the investigation without ever trying any of the accused if there is insufficient evidence.  In this case, she believes the Muslim Brotherhood will do their best to discredit and exclude the three from political life, pointing at the prosecutor general who was himself appointed by Morsy despite judicial rules requiring he be elected from within the judiciary.

Mohamed ElBaradei is a Nobel Peace laureate, a distinction he earned alongside the International Atomic Energy Agency when he served as director general. Amr Moussa was a former minister of foreign affairs and secretary general of the Arab League and Hamdeen Sabahy is a known Nasserist and the strongest secular candidate during the 2012 presidential election, garnering the third most votes behind Morsy and Ahmed Shafiq. All three are prominent members of the National Salvation Front (NSF), the largest opposition bloc and avid opponents of the new constitution.

Ahmed Hawary, spokesperson for the NSF called the allegations a “bogus fabrication by the Muslim Brotherhood.” Abdullah had previously worked in Bahrain as a judge, and according to Hawary “was brought back by the Brotherhood to be the cornerstone for their plans to get rid of the opposition.”

“Let’s call him an inquisitor, not a prosecutor general,” Hawary added. “This is just the beginning of the Muslim Brotherhood inquisition.”

“All our discourse is evidence of civil discontent,” Hawary said. “We are trying to make him hear reason, and advise him how democracy should be exerted after the revolution.” He continued by saying that the NSF had always called for peaceful demonstrations, condemning outbreaks of violence, and has always been politically active. “We are always exerting self-restraint,” he said, adding that recent attacks on their protesters by Morsy supporters are “proof the Brotherhood is conspiring against Egypt.”

To the NSF, this is not merely a media stunt looking to weaken the opposition. Hawary points at a large number of judges whose loyalties are tied to the Brotherhood, and with a loyalist prosecutor general, “the case will be as rigged as the elections.”

“They are worse than Mubarak and to think of them as smart is impossible,” Hawary said, defending his position by explaining that Morsy could have garnered a lot of public support from the opposition for his removal of the former prosecutor general, a man considered to be one of the key remaining figures of the old regime and architect of much of Egypt’s judiciary. Rather than take the appropriate steps to remove him, Morsy overstepped the judiciary and in doing so assumed more extraordinary powers than former President Hosni Mubarak ever had.

The NSF have confirmed ElBaradei and Sabahy have both received death threats, another tactic being used to shut down the opposition, according to Hawary. “We are treating it as a bogus and rigged accusation in an attempt to terrorise the opposition but they may be stupid enough to go through with it,” he added.

Since Morsy’s ascension to power, there has been a lot of conflict between newspapers and the government. Several people have been taken to court for insulting the president and the editors-in-chief of many newspapers were replaced with what many see as Brotherhood sympathisers.