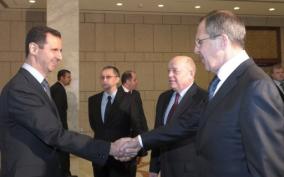 AFP — Russia, the only big power with close ties to the Syrian regime, on Friday urged President Bashar al-Assad to follow through on pledges to meet the opposition and keep all options open for a transition government.

The call came as Moscow revved up its bid to save a tattered peace process by first hosting a top Assad envoy and then planning for a meeting Saturday with Syria peace mediator Lakhdar Brahimi.

Russian Foreign Minister Sergei Lavrov said Moscow still refused to back international calls on Assad to step down and expected the Syrian people to decide their own country’s fate.

But he made explicit that Moscow wanted Assad to put all options on the table after 21 months of violence that have claimed more than 45,000 lives.

“We actively encouraged… the Syrian leadership to maximally put into action its declared readiness for dialogue with the opposition,” Lavrov told reporters when asked about his meeting Thursday with Syria’s Deputy Foreign Minister Faisal Muqdad.

He noted that Russia hoped to see Assad’s government “underscore that they are open to discussing the widest range of items in line with the agreements reached in Geneva on June 30.”

That accord — rejected by the opposition and never implemented because of the fighting — sought to quickly establish an interim coalition government but made no direct call on Assad to step down.

Russia has been chastised by Western and Arab nations for continuing to supply Damascus with weapons and refusing to accept that no solution was possible with the regime still in power.

Yet the West lacks direct access to Assad and needs Russia to put across the message to the regime that its days are numbered and that it cannot hang on to power through force alone.

Moscow has in the last weeks moved to distance itself from the rulers of what was its last big ally in the Middle East.

President Vladimir Putin has twice this month said that Moscow had no intention of propping up Assad. Officials have also confirmed making preparations for an evacuation of Russian nationals in case of the regime’s fall.

And Lavrov himself warned on Thursday that time was running out for Damascus to accept the terms of the Geneva accord.

“The chances for such a solution… are diminishing,” Lavrov said Thursday after his talks with Syria’s Muqdad.

Lavrov’s warning came against the backdrop of continuing gains by the armed opposition and an earlier admission by Moscow that Assad’s forces may not hold out for much longer.

The Syrian leadership has said nothing so far about its talks with the Russians.

Efforts to revive the peace process will continue in Moscow on Saturday following Brahimi’s extended visit to Damascus for talks with both Assad and opposition representatives.

Brahimi revealed Thursday that he had been discussing the details of a transition government that had full powers and implemented “real change”.

“Change should not be cosmetic; the Syrian people need and require real change, and everyone understands what that means,” Brahimi said on the fifth and final day of his stay in Damascus.

Yet Lavrov stressed on Friday that all peace efforts were futile unless Western powers impressed on the opposition the need to engage in talks that left open the possibility for Assad to hang in on an interim basis.

“I hope that the inside Syria will prompt reasonable members of the opposition to search for way to start a political dialogue,” Lavrov said.

“The international community must not incite either side toward violence or pose preliminary conditions.”

A top Russia official had earlier Friday said Moscow had also sent an invitation for talks to the head of the opposition National Coalition as it presses on with its diplomatic campaign.

Deputy Foreign Minister Mikhail Bogdanov told the RIA Novosti news agency the talks with National Coalition head Ahmed Moaz al-Khatib could take place in Moscow or at a foreign location such as Geneva or Cairo.

Lavrov told reporters that “as far as we understand, they (the National Coalition leaders) are not against this offer” for new talks.

The last Moscow meeting with representatives of the National Council in July ended in mutual recriminations and saw the opposition accuse Russia of inciting further violence by supporting Assad.