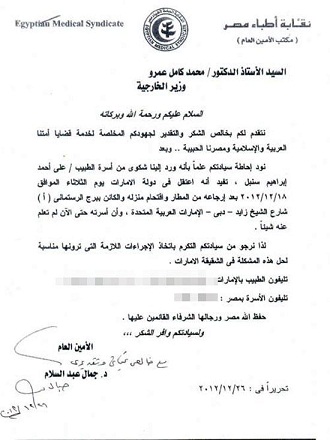 Three Egyptian doctors were detained and taken to an unknown place by security forces in the United Arab Emirates. The reasons of detention are  so far unknown .

The freedoms committee at the Doctors’ Syndicate confirmed that the three doctors, Mohamed Ali Sonbol, Mohamed Shohda and Abdallah Zaa’zaa’, were arrested for no apparent reasons by an unknown security body in UAE.

The Doctors’ Syndicate sent a report to the Ministry of Foreign Affairs, where they demanded the investigation of the cases.

Khairy Abdel Dayem, head of the Doctors’ Syndicate, said the report was sent to the ministry on Wednesday, adding that they have yet to receive any response from them. He also said the syndicate is contacting the doctors’ families and will contact the Emirati government directly. “We are moving in several parallel paths in order to free the doctors.”

Spokesperson for the Ministry of Foreign Affairs Amr Roshdy asserted that the ministry is in contact with Egypt’s consulate and embassy in UAE to provide the required assistance for the arrested doctors.  No further information was provided by the ministry.

The Doctors’ Syndicate issued a statement on Saturday mentioning they appointed Mohamed Abdel Hameed, member of the freedoms committee at the Syndicate, to handle the case of the three doctors.

Abdel Hameed said that Sonbol, who works as a cardiologist for a hospital in Dubai, was travelling on 18 December to Egypt with his family for his annual vacation when he was prevented from departure by security officers in the airport. The officers said they had instructions to prevent him from leaving UAE, and ordered him to go home.

“After he went back to his home, Emirati police stormed and searched his home. They took his laptop and mobile phone, and took him to an unknown destination without any legal permit. Two hours later, police went back to Sonbol’s home and told them they are not allowed to leave the country,” said Abdel Hameed.

He added that Sonbol’s wife went to the police and prosecution offices to inquire about the reasons for arresting her husband. Officials at both offices denied knowing anything about Sonbol.

Sonbol’s wife asserted he had no political affiliation, according to Abdel Dayem, who asserted that the other two doctors faced similar circumstances.

Sonbol’s family could not be reached for comments.

Abdallah El-Karbony, assistant head of the Doctor’s Syndicate, said the incident will not go unpunished, adding that the syndicate would escalate the situation if the doctors are not released within the next hours. He called on President Mohamed Morsy and the Ministry of Foreign Affairs to act quickly to resolve the situation.