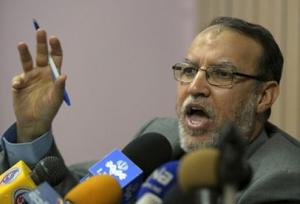 The Freedom and Justice Party (FJP) has defended its Vice-President Essam El-Erian’s recent statement made on the Egyptian Dream TV channel, where he called on Egyptian Jews and foreign-born Palestinians to return to their homelands.

El-Erian made specific mention of Egyptian Jews, calling on them to return home, saying their departure from Israel would allow for Palestinians to resettle their homes.

El-Erian’s latest remarks were made on live television, where he proceeded to criticise former President Gamal Abdel Nasser, by asking the Dream channel presenter why Nasser had expelled Jews from Egypt in the first place. El-Erian was critical of Nasser’s reign, saying their exodus contributed to the occupation of other’s lands.

“Egyptian Jews should refuse to live under a brutal, bloody and racist occupation,” El-Erian added.

Mohamed Soudan, the FJP spokesperson, defended El-Erian’s statement by saying it was the party’s desire to see Palestinians return to their homeland.

“Our policy is clear,” Soudan said. “We call on all occupied people to return to their lands and we ask, or rather hope, that Palestinian people will return.” The party’s official position on the matter also extends to Jews living in Israel. “If you ask for one group to return, so too must we ask the others,” he said, adding that Jews should return to wherever they may have come from, be it “Poland, Egypt or anywhere.”

Soudan was quick to emphasise the party stood against Zionism, but have no qualms with Jews. “They have a complicated history, but the Jewish motherland is not Israel,” he added, whilst also saying Egyptians should celebrate the different faiths together as they are part of a greater whole.

In response to El-Erian’s comments, a lawsuit was filed on the grounds that he is in a position of responsibility, and should not be spreading false information that could be harmful to national security; inferring that Arab and Egyptian Jews that are responsible for occupying Palestine.

Egyptian law recognises, and allows, the practice of the “three heavenly faiths,” namely Judaism, Christianity, and Islam. However, sectarian strife exists between the faiths and Christians have since the revolution seen an increased number of attacks on their places of worship. Tensions between religious groups are exacerbated by repeated calls from fringe groups for an Islamic nation governed by Islamic law with no place for other faiths. More recently, Coptic representatives in the Constituent Assembly withdrew in protest to what they saw was an Islamist-dominated assembly and a constitution that did little to safeguard their rights

The current Jewish population in Egypt is negligible. By their own estimates, there are less than 100 Egyptians who identify themselves as being Jewish. The population keeps a low profile out of fear they would be persecuted.