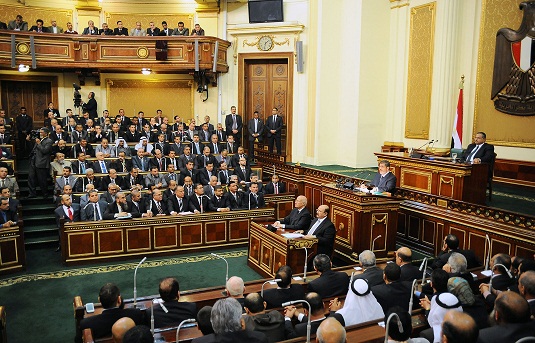 President Mohamed Morsy formally transferred legislative power to the Shura Council in his address in front of the upper house of parliament Saturday.

Morsy had appointed 90 members to the council and ended its legislative session following the adoption of the new constitution. The charter’s transitional articles transfer legislative authority from the president to the Shura Council until the lower chamber of parliament, the House of Representatives, is elected.

The Shura Council met for the first time since the constitution was adopted on Wednesday and its members listened to Morsy’s address on Saturday.

Other than transferring legislative powers, Morsy also for the third time called on the opposition to participate in the national dialogue that he sponsors. The opposition, manifested in the National Salvation Front, has been refusing to hold talks with Morsy without the presence of a specific agenda.

The president outlined the upcoming political process and said the opposition must engage in dialogue so there would be consensus over the parliamentary elections law that the Shura Council will draft.

He also congratulated the council on its newly acquired legislative powers. The Shura Council was created by President Anwar El-Sadat in 1980 but was mainly an advisory body with little power save for appointing heads and editors of state publications.

Although the council now holds full legislative power it will not be handed over once the House of Representatives is elected. The new constitution stipulates that both houses of parliament legislate together and neither may pass a bill without the other’s approval.

The Shura Council will also be entrusted with appointing heads of independent and supervisory bodies such as the Central Auditing Agency and the Illicit Gains Authority, said Morsy.

He then addressed at length Egypt’s economic problems and while he admitted the country was facing economic difficulties, Morsy said that the problems had been exaggerated.

Morsy said inflation has been at an all time low these past two months, since the 25 January 2011 revolution and that the monetary situation was stable. He denied claims that the banking sector was facing any difficulties.

Foreign reserves are now at $15.5bn, a $1.5bn increase from June 2012, he said. Morsy added that although this is an improvement, foreign reserves were now at half of where they were before the revolution and that he has a strategy to double them again.

The president also refuted claims that the state was going bankrupt. “I say to those who say Egypt is going bankrupt, it is you who are [morally or politically] bankrupt,” he said.

Morsy said that he is working with Prime Minister Hesham Qandil to make the necessary cabinet reshuffle in order to address the economic situation and that he intended to form an Economic Development Council that would be directly under the presidency’s jurisdiction.

Finally, the president addressed foreign affairs. He told Members of Parliament that he would not allow anyone to interfere in Egypt’s affairs but that the state also honours all its international agreements.

“The Palestinian cause will always be at the heart of our interests,” and “Egypt’s security does not begin at its borders,” were two telling statements. “The security of Egypt is synonymous with the security of the Gulf,” he added.

The Syrian revolution dominated most of the foreign affairs segment of the speech. Morsy said that Egypt supports the Syrian people’s quest for freedom, and that the revolution was legitimate.

“The Syrian revolution is a people’s revolution. We support it, and it will succeed. And Syria will remain united,” said Morsy.

Before Morsy arrived, dozens of protestors demonstrated in front of the House of Representatives building, which is where Morsy addressed the Shura Council members, AFP reported.