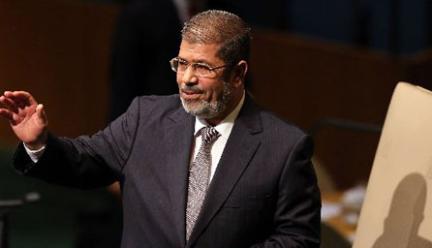 President Mohamed Morsy delivered a speech to the newly-formed Shura Council Saturday night. He said the time had come for the country and its citizens to turn their efforts towards “work, seriousness and effort.”

“It is time for action and production for the advancement of Egypt and to build a state of institutions,” Morsy said addressing the council. He reiterated that a modern state could not be built without a free media, detached from any influence of authority and special interest groups.

Morsy also called for the country to strengthen the role of civil society and ensure the rapid advancement of an ailing national economy. As part of his plan to promote unity and stimulate economic growth, Morsy announced he would create jobs and invest in developing the Sinai region and the Suez Canal, citing an investment rate of 11.1 per cent of the GDP as one of his achievements during his tenure.

“[Morsy] believes this has been accomplished, but he does not know to what extent this is a disaster,” Ahmed El-Naggar, a senior economic fellow at the Al-Ahram Centre for Strategic and Political Studies said, adding the reality is this level of investment would only lead to slow growth and a limited number of new jobs comparatively to the number of entrants to the labour market.

Responding to El-Naggar’s comment, the Freedom and Justice Party spokesman Mohamed Soudan said he must keep in mind the country has undergone a revolution and a very turbulent transition to democracy.

El-Naggar pointed at the investment rates in impoverished countries and mid-level developing nations, where the rate of investment is as high as 24 and 37 per cent respectively.

Prior to the revolution Egypt’s growth rate stood at 5.1 per cent and fell to 1.5 per cent in 2011. El-Naggar said that the International Monetary Fund estimates a two per cent growth rate, but that would fall due to the instability caused by Morsy’s decree.

“The internal debt has crossed all red lines and reached about EGP 1,350bn.” El-Naggar said.

“If Egypt’s debt had reached 962bn by January 2011 and the government has borrowed more than 100bn in the last six months it means that within four years we could be borrowing the equivalent of what Mubarak had borrowed over 30 years.” He concluded by saying it would be in the president’s interest to focus his efforts on the economic crisis and to stop issuing statements on issues he knows nothing about.

Soudan said that “when it comes to the state of the economy we must look to the professionals in the banking sector, and not the opinion of people on the streets.”

Morsy told the Shura Council it would have legislative powers until such a time as a parliament can be elected, and announced the creation of a new media regulation body tasked with monitoring the state-owned press and their media activities.

Morsy also made mention of the Judiciary, by saying its independence must be strengthened and preserved. He also defended the new constitution by saying it guarantees equal rights for all citizens.

Soudan defended Morsy’s speech by pointing out that there were financial projects being developed and proposed by Prime Minister Hisham Qandil. The problem, he said, lies in the current instability in Egypt, which he blames on the actions taken by the National Salvation Front (NSF).

“We have a major problem with foreign investors and tourism,” Soudan explained. “The instability makes investors hesitant to invest in Egypt and it keeps tourists away.” He also criticised the NSF for the way they have opposed the constitution and Egypt’s economic policy, saying the front needs to change the way in which they act as an opposition.

“If they demonstrate according to the law, then it will help with the country’s economic recovery because investors and tourists will return,” Soudan said, adding that the foreign currency reserves are enough to last the next three months and would be on the mend once security returns to the country.

The FJP have also announced they will make good on their pre-election promise of bringing in EGP 200bn worth of investments, saying a deal had been struck with 27 different international Islamic banks for the value of $2bn. The banks however, according to Soudan, are waiting for the country to stabilise before committing to their agreement.