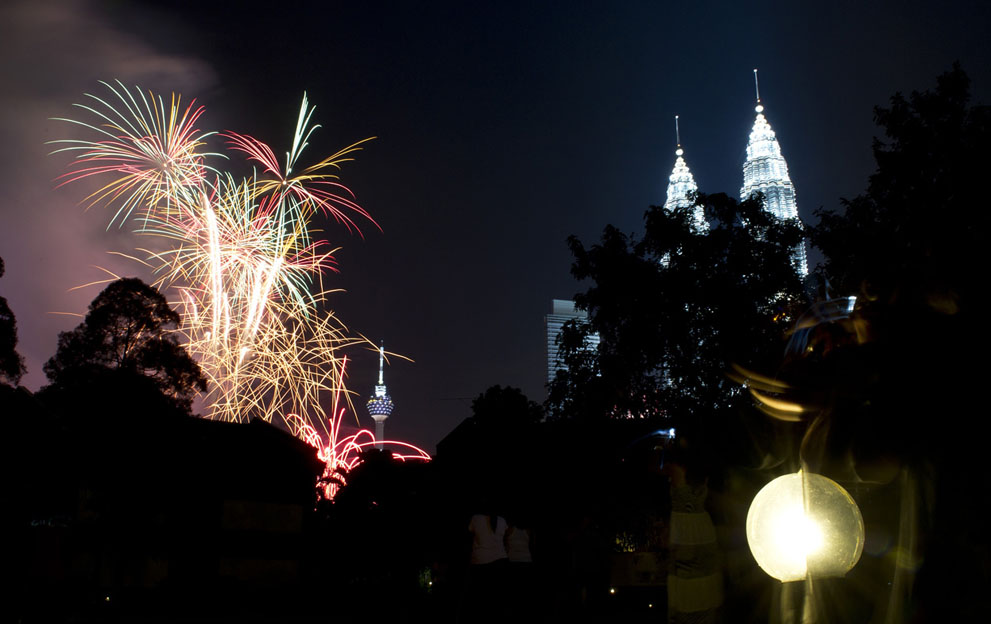 Regardless of what corner of the world you call home, the arrival of the new year is a time for fresh starts, hopes and dreams. A time when one draws a line and hopes that the year to come will be better than the one passed.

As one of the world’s oldest shared traditions, New Year’s celebrations take many forms of which the most widespread is seeing out the old year in a drunken haze accompanied by off-key renditions of Auld Lang Syne that make you want to pop open another bottle of bubbly.

But some have more unconventional ways of welcoming a new year, often steeped in superstition.

In some parts of Switzerland and Austria on New Year’s Eve locals celebrate Saint Sylvester, who was pope in the year 325. People light bonfires in the mountains and ring church bells to signal the passing of the old year and the beginning of the new. It is also not uncommon in restaurants and cafes for the owner to set a pig loose at midnight. Everyone tries to touch the pig because it is considered a symbol of good luck.

In Scotland the New Year’s Eve is known as Hogmanay. The roots of Hogmanay date back to the celebration of the winter solstice, incorporating elements of the Gaelic celebration of Samhain. In some regions of Scotland locals set straw men on fire. The straw men symbolise the old year, which is burnt to make room for a new one.

Scots also practice the “first-footing” tradition, which starts immediately after midnight. The first person to cross the threshold of a friends’ home must carry symbolic gifts such as salt, coal, shortbread, whiskey and a black bun (rich fruit cake) to bring luck to the owner of the house.

In Germany lead is considered auspicious. Germans pour molten lead into cold water and the shape that is taken after predicts the future. A bubbly surface can mean money is coming your way; a heart shape symbolises marriage, whereas a round shape denotes good luck.

In the city of Talca in Chile people attend New Year’s Eve mass and then head to the cemetery, set up their chairs and wait for the arrival of the New Year together with the dead.

New Year’s time in Puerto Rico resembles more spring cleaning than anything. People clean their homes and decorate them, as it is supposed to symbolise the “cleaning” of the spirit. They also throw buckets of water out the window to “clean” the old year out.

The Danes collect dishes all year long and on New Year’s Eve they throw them at their friends’ homes. It is said that the more broken plates in front of your door, the more friends you will have in the new year. Also in Denmark people stand on chairs and jump off as the clock strikes midnight, literally leaping into the new year.

In Spain if you want a new year filled with good luck it is customary to eat 12 grapes, one at each strike of the clock.

One of the funniest sights of New Year’s Eve seems to be in Ecuador where men dress up as women to represent the “widow” of the year that has passed. At midnight friends, families come together and burn Monigotes (papier-mâché dummies) of politicians, public figures and popular culture icons to get rid of the bad feelings, events and spirits of the past year.

In ancient Egypt the New Year was celebrated during the first week of September when the River Nile flooded, which also coincided with the summer solstice. The flooding of the Nile was of utmost importance because without it the people would not have been able to grow crops in the dry desert. At New Year’s, statues of the sun god Amun-Ra and his wife and son were taken up the Nile by boat. People would sing, dance and feast for one month, after which the statues were taken back to their temples.

Sadly, in modern-day Egypt there is no particular tradition associated with ushering in the Islamic New Year, or hijra, which was first marked in 610 AD when the Prophet Muhammad journeyed from Mecca to Medina. However, last year, on 31 December, Egyptians gathered in the iconic Tahrir Square, shoot up fireworks, light candles and hoped for a better 2012. This year they will do the same and yet again put their hope in the new year because, despite a tumultuous 2012, it seems that Egyptians have still not lost faith in change.