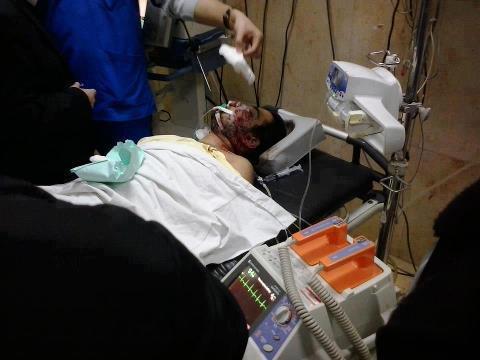 Barely two and a half months after his release from prison, student Mohanad Samir has been shot at Tahrir Square in the early hours of Monday morning.

Friends and family of the young man are said to be in shock as Samir lies in the intensive care unit of Ahmed Maher Teaching Hospital. His lawyer, Tamer Goma’a, said “he is breathing on a respirator.”

He was shot with multiple birdshot, one penetrating the skull and one hitting the brain stem, Goma’a said. His lawyer also said the doctors consider Samir to be in a very critical condition.

Samir was at the sit-in in Tahrir Square when he was shot. The full details of the circumstances of the shooting are yet to emerge, but Reham Al-Sharqawy – sister of Ramy Al-Sharqawy, a protester killed by a gunshot to the chest during the Cabinet clashes in December 2011— believes that Samir was specifically targeted.

“He was part of a group and he is the only one who was shot. Of course, he was targeted… He was the only witness in the case of Ramy Al-Sharqawy,” she said, speaking from inside the hospital.

Samir had spent most of 2012 in prison. He was arrested in January, following the Cabinet clashes, and released in late October. He is believed to be the only person who can identify Al-Sharqawy’s killer. He was arrested after going to the Cairo Directorate of Security to identify the killer.

Samir had not fully recovered from a thigh injury sustained during the Cabinet clashes when he was detained and throughout his imprisonment he was in need of surgery.