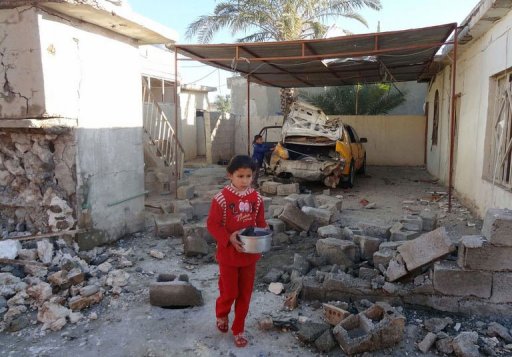 Baghdad (AFP) – Violence in Iraq dropped in 2012, data released Tuesday showed, but insurgents proved they were still capable of mounting waves of attacks and a watchdog warned the country was still in a “low-level war.”

The warnings, which come after the first full year since American forces completed their withdrawal in December 2011, were punctuated by a series of nationwide shootings and bombings on New Year’s Eve in which 28 people were killed and nearly 100 wounded.

The latest violence came just days ahead of a major Shi’a commemoration ceremony, and after more than a week of non-stop anti-government rallies in Sunni-majority areas where demonstrators allege targeting of their community by Iraq’s Shiite-led authorities.

A total of 144 people were killed across Iraq last month, including 40 policemen and 15 soldiers, and 360 others were wounded, according to figures compiled by AFP based on reports from security and medical officials.

And data released by Iraq’s ministries of health, interior and defence said 2,174 people were killed throughout last year, sharply lower than in previous years, particularly compared to the height of the country’s brutal sectarian war from 2005 to 2008 when tens of thousands were killed.

But Britain-based monitor group Iraq Body Count put the overall death toll at 4,471, more than double the official figures, though the last three months of 2012 represented a record low.

It warned in its annual report that “the country remains in a state of low-level war … with a ‘background’ level of everyday armed violence punctuated by occasional larger-scale attacks designed to kill many people at once.”

“2012 has been more consistent with an entrenched conflict than with any transformation in the security situation for Iraqis in the first year since the formal withdrawal of US troops,” it said.

US troops withdrew in December 2011, though a small contingent of around 150 soldiers remains as part of a bilateral agreement to help train and supply Iraq’s security forces.

Baghdad’s police and military are widely agreed to be largely able to maintain internal security, but are not expected to be fully capable of defending Iraq’s borders, airspace and waters until 2020.

In a sign insurgents were still capable of carrying out deadly nationwide attacks, a series of shootings and bombings in the north, centre, and south of the country killed 28 people and wounded 96 others on Monday.

No group immediately claimed responsibility, but Sunni militants such as Al-Qaeda’s front group in Iraq regularly carry out attacks to destabilise the government and re-ignite communal conflict.

Much of Monday’s violence targeted Shi’a pilgrims, ahead of Arbaeen commemoration ceremonies due this week.

In the deadliest single attack, seven people – three women, two children and two men – were killed when three houses were blown up in the town of Mussayib, south of Baghdad, police and a medic said. Four others were wounded.

The victims were apparently targeted because they were Shi’a, the officials said.

Attacks on pilgrims embarking on the traditional walk to the holy shrine city of Karbala for Arbaeen commemorations also killed one person and wounded 19 others.

Arbaeen, which this year falls on Thursday, marks 40 days after the Ashura anniversary commemorating the slaying of Imam Hussein, one of Shi’a Islam’s most revered figures, by the armies of the caliph Yazid in 680 AD.

The violence comes after anti-government protesters blocked a key highway to Syria and Jordan, amid political tensions between Shi’a Prime Minister Nuri Al-Maliki and a secular Sunni-backed party in his fragile national unity government.