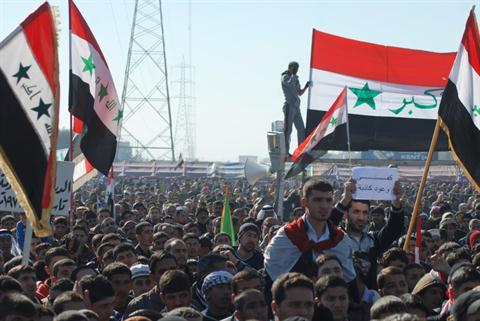 AFP – Thousands of Sunni Muslims demonstrated in Baghdad on Friday, in the latest of nearly two weeks of rallies criticising Iraq’s premier and demanding the release of prisoners they say are wrongfully held.

Demonstrators gathered at the Abu Hanifa mosque in the mostly-Sunni neighbourhood of Adhamiyah, but were barred by security forces from leaving the compound to rally on the street, an AFP correspondent said.

The protesters held up banners calling for a mass prisoner release, stronger human rights provisions in Iraq’s prisons, and a repeal of current anti-terror legislation.

They have called for the release of prisoners they say were detained because of their Sunni background, and an end to the alleged misuse of anti-terror legislation by the Shiite-led authorities against their community.

“Baghdad, free, free! Iran, go away!” they shouted, a reference to their belief that premier Nuri al-Maliki’s government is beholden to Iraq’s Shiite neighbour Iran.

“How much longer will our children stay in prisons for no other reason than being Sunni,” asked a man who gave his name as Abu Abdullah.

Another protester who identified herself as Umm Mohammed told AFP: “My three children were arrested four years ago for no reason and I ask Maliki — release them.”

The protests come amid a political deadlock between Maliki’s Shiite-led government and a secular Sunni-backed party that is in his cabinet but publicly opposes him.

The protests began on December 23, and were sparked by the arrest of at least nine guards of Finance Minister Rafa al-Essawi, a Sunni Arab and a leading member of the secular Sunni-backed Iraqiya bloc, which is part of Maliki’s unity government but frequently criticises him in public.