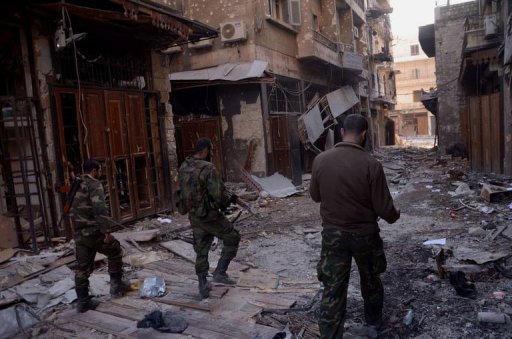 AFP – At least nine people were killed when a car bomb exploded in the Syrian capital, the Syrian Observatory for Human Rights said Friday amid reports of furious combat raging around a major airport and a military airbase in the north of the country.

Many people were seriously wounded in the car-bomb attack in a northern Damascus neighbourhood, and the death toll may climb, the group’s director Rami Abdel Rahmane told AFP.

The Observatory, which relies on a network of fighters and doctors to monitor the conflict in Syria, said the attack ocurred in an area with a large population of Alawites, an offshoot of Shiite Islam and the minority community of President Bashar al-Assad.

State news agency SANA said the incident was a “terrorist attack” that had targeted a petrol station near a hospital.

The Syrian authorities refer to the anti-Assad rebels as “terrorists” armed and funded from outside the country.

The SRGC also said there had been prolonged gunfire but did not say where it came from.

Insurgents on Thursday besieged troops on the perimeter of Aleppo’s international airport and around Taftanaz airbase in Idlib province, a day after the United Nations gave a staggering toll of 60,000 dead in the 21-month civil war.

The airport in Aleppo, the hard-fought-over main city in northern Syria, has been closed since Tuesday after repeated attacks by rebels, according to an airport official.

The rebels had remotely detonated a bomb at one of the base’s gates the day before but were pushed back by the army, according to both the Observatory and a military source inside the airbase.

The military source told AFP that clashes outside Taftanaz had been non-stop for more than 48 hours and that there had been a large number of rebel casualties.

Three rebels were also killed by troops around the Deir Ezzor military airport, as fighting broke out in the provincial capital in the east of the country.

In the town of Mleha, just east of Damascus, bodies were being recovered from a service station hit by a regime air strike on Wednesday.

The Observatory said at least 12 bodies were recovered, several of them rebels. The Local Coordination Committees, a grassroots network of activists, estimated that at least 50 people died in the attack.

The Observatory said 160 people were killed in violence across Syria on Thursday, including 72 civilians, almost half of whom were women and children.

Khan told reporters he had spoken to Brahimi on Wednesday and that “there are new contacts, there is a new effort under way” to find a political resolution.

“We are hoping there will be a trilateral meeting sometime next week between Moscow, Washington and Mr Brahimi,” said Khan, whose country currently holds the rotating presidency of the United Nations Security Council.

On the humanitarian front, a 33-truck aid convoy organised by Turkish and Qatari relief groups left Istanbul on Thursday carrying 850 tonnes of flour.

“Assad’s regime is bombing the bakeries and there is a very huge need for flour in Syria,” Huseyin Oruc, the vice-president of Turkey’s IHH Humanitarian Relief Foundation, said.

The overall estimated death toll of 60,000 in the Syria conflict has unsettled observers.

UN High Commissioner for Human Rights Navi Pillay on Wednesday called it “truly shocking” as she revealed a vetted UN tally nearly a third higher than that previously compiled by the Observatory.

“The number of casualties is much higher than we expected, and is truly shocking,” she said.

“Given there has been no let-up in the conflict since the end of November, we can assume that more than 60,000 people have been killed by the beginning of 2013,” Pillay added.

The average number of deaths recorded in recent months was five times that registered by mid-2011, reflecting intensifying viciousness and an increased resort by the government to air strikes.

Pillay said that “this massive loss of life could have been avoided” if the government of President Bashar al-Assad had not chosen the “ruthless suppression” of what initially were peaceful protests.

One of Assad’s main allies, Hassan Nasrallah, chief of the Shiite militia Hezbollah in neighbouring Lebanon, warned in a televised speech on Thursday that Syria was threatened with “schemes of division and partition”.

Karim Bitar, an analyst at the Paris-based Institute for International and Strategic Relations, was sceptical that the new UN toll would have a political impact, however.

“The world has become unfortunately so toughened to these figures, sort of anaesthetised. There is this terrible Stalin quote: ‘One death is a tragedy; one million is a statistic’,” he said.

What is the Ahrar Al-Sham organisation in Syria?