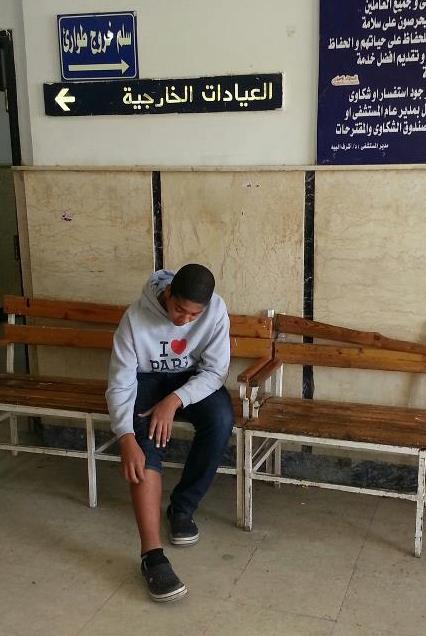 Rasha Sadeq, mother of 16-year-old Youssef Wael, filed her son’s forensic report with the police on Saturday as proof of injuries he sustained on December 27.

Wael, a high school student at El-Quadah Leaders School, was playing football with his friends in an adjacent school yard when school security “called them names and told them they are not allowed there,” said Sadeq.

The boys got angry and things escalated when security personnel attacked and beat them. “The school’s headmistress’s daughter [and Vice President], Eman Hafez, intervened and took the boys to her office only to be followed by the security guards who threatened the boys again,” added Sadeq.

The boys left after Hafez promised to reprimand the guards.

Sadeq filed a restraining order against the school security guards the following Saturday.

On Sunday, Wael was called in by the headmistress, Doha Ali, who “threatened [that] either I withdraw the restraining order or [Wael] gets expelled,” said Sadeq.

Ali denied all allegations “I do not know what is happing to the boys nowadays. It’s like they are in a state of anger all the time like its Tahrir [Square] all the time.” She accused the boys of attacking the guards after refusing to evacuate the yard.

“We filed complaints against them and asked [Wael’s] mother to keep him at home to avoid further clashes,” stressing that Wael violated the school conduct agreement. She also stated that she has issued a rule preventing more than three school children from standing together in the yard, except in school events or football matches.

Sadiq filed another complaint on Wednesday claiming that her son was being held against his will in one of the school’s offices by the administration, “I went to the police station and after much cajoling, I got one of the officers to go to the school to prove it,” she explained, “I also asked Youssef to take photos of where he is to prove it.” Ali adamantly denies holding Wael against his will.

In February 2011 a complaint was filed due to ‘thuggery’ at the school. Sadiq said that because of problems between Ali and Hafez, the latter hired thugs to take over the school from her mother, “then they reached a truce and hired new security guards.”

Ali denies any family tensions and says that they changed the security staff “and hired military-affiliated security after thugs attacked the school.” The new guards have orders not to touch any of the students much less call them names,” she added, “we hired them to secure school parameters.”

Ramy Ghanem, Sadiq’s lawyer, said that there is a current trend in private schools in Egypt to use security personnel “with violent tendencies especially when guarding high school parameters, for in their minds, it enables them to deal with teenage boys.”

Ali maintains the school position that no excessive violence was used, but injuries may have resulted from the ensuing clashes, saying “this is what Tahrir did to our boys.”

Sadiq, a well-known activist, stressed that she will not allow her son’s rights to be violated and is continuing with the complaint.