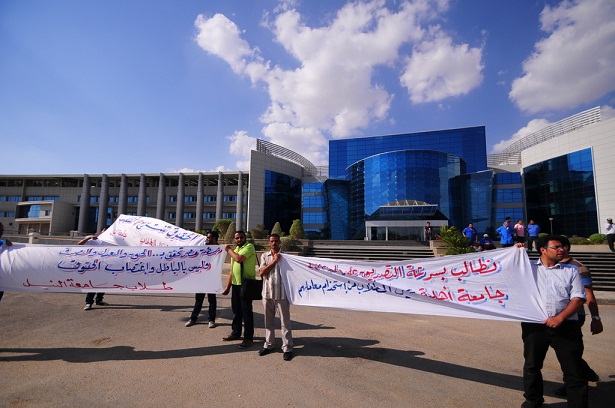 Zewail had invited public figures—such as the Grand Mufti Ali Gom’a, Former Prime Minister Essam Sharaf and Former Minister of International Cooperation Fayza Abul Naga—to the cornerstone laying ceremony at the Helmy Scientific institute on Thursday. The institute is due to be founded on the land disputed between Nile University and the Zewail Science City.

Nile University students haven’t been allowed access into the disputed area despite the court ruling. Allam said the university approached different state authorities, including the Ministry of Higher Education, only to be turned down every time. “They all tell us it’s not within their authority to give us permission to access the lands.”

The students, who have held demonstrations outside the campus since September 2012, gathered Thursday and blocked the visitors’ exit. “We wanted to be heard,” Nancy Mustafa, Nile University Student said. She stated that three Central Security cars were present to secure the place.

“Central Security Forces started pushing us away to allow the visitors to exit,” Mustafa said. Nile University Students released a statement on Friday denying to have attacked the visitors.

Zewail has challenged the Administrative Court’s verdict. The court referred the case to the State Council’s commissioners who advised turning down the appeal.

“While we expected the court to rule during the latest session that the challenge is rejected, we were informed that another challenge to the verdict was filed by President Mohamed Morsy, Qandil, and Sa’ad,” Allam said, referring to the session held on Tuesday. By submitting that challenge, the state authorities have made themselves party to the conflict.

President Mohamed Morsy issued a decree two weeks ago announcing the establishment of Zewail Science City. Allam nevertheless claimed the decree was vague and thus doesn’t give Zewail the right to establish institutions on lands returned to Nile University through a court ruling.