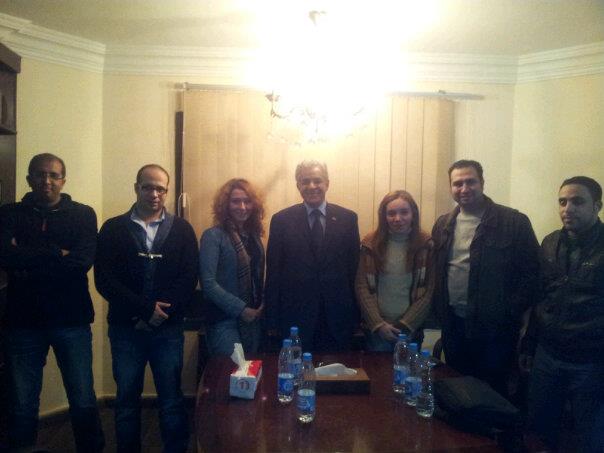 The meeting came as part of a series of such meetings 6 April are conducting with several parties and groups, to determine who they will back in the election and help create a unified opposition alliance.

The movement itself will not be fielding candidates in the election, said its general coordinator and founder Ahmed Maher. Rather, it will function as a “conscience movement” and link between “patriotic groups” in order to actualise the goals of the revolution, Maher said.

“The meeting was held to discuss cooperation within patriotic work and the upcoming elections,” said Popular Current spokesperson Heba Yassin.

April 6 has announced it will back any coalition or group so long as they are revolutionary and do not contain supporters of the previous regime.

The Popular Current will be running in the election as part of unified list fielded by the National Salvation Front, a wide opposition bloc, Yassin confirmed.

NSF has come under criticism from some revolutionary groups and youth from its own member parties for including figures that could be considered as members of the former regime, such as Conference Party leader and former presidential candidate Amr Moussa.

Moussa served as foreign minister under former President Hosni Mubarak for a decade during the 1990s before being elected Arab League Secretary General.

Sabahy told Sky News Arabic on Friday that Moussa did not have blood on his hands unlike other officials and as such allying with him was acceptable.

“It is true that Mr Amr Moussa is considered feloul and part of the previous regime but I do not think he himself will be running for parliamentary elections,” said Yassin when asked about reconciling the fact the Popular Current is part of NSF but seeks the backing of April 6.