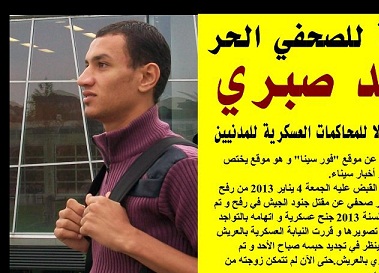 The military trial of Muhamed Sabry, a Sinai-based photo-journalist, has been postponed from Sunday to Wednesday.

Reham Abdelaziz, Sabry’s wife, said she was on her way to the hearing when she learned it had been postponed.

Sabry was arrested by the military on Friday and was taken to the Central Prison in Al-Arish. The military prosecution decided to keep Sabry in custody for four days. The renewal of that decision was set to be made on Sunday morning. Instead, he was taken to Ismailiya.

Sabry is charged with being in a military zone and taking pictures of a military facility.

On Saturday, a military spokesperson said, “he was arrested by troops near Rafah border crossing for filming in a military zone. He is still under investigation.”

According to the group No Military Trials, Sabry was in Rafah making a report on the killing of army soldiers in the region. Sabry is a member of No Military Trials. The group has called for solidarity with the photo-journalist, in order to protect a free press and to bring an end to military trials.

Abdelaziz is concerned because her husband is a freelancer. He is not a member of the Press Syndicate or a newspaper: “But he lives in Sinai and he is very well known there… he has been working there for a long time and he has worked with many journalists.”

Sabry also runs a website that focuses on Sinai’s issues and news.

Article 198 of the constitution states that civilians cannot be tried by the military, except for crimes that harm the armed forces. Critics of the article say the exception opens up the possibility of trying many people before military courts for what may be perceived as “harming” the military.