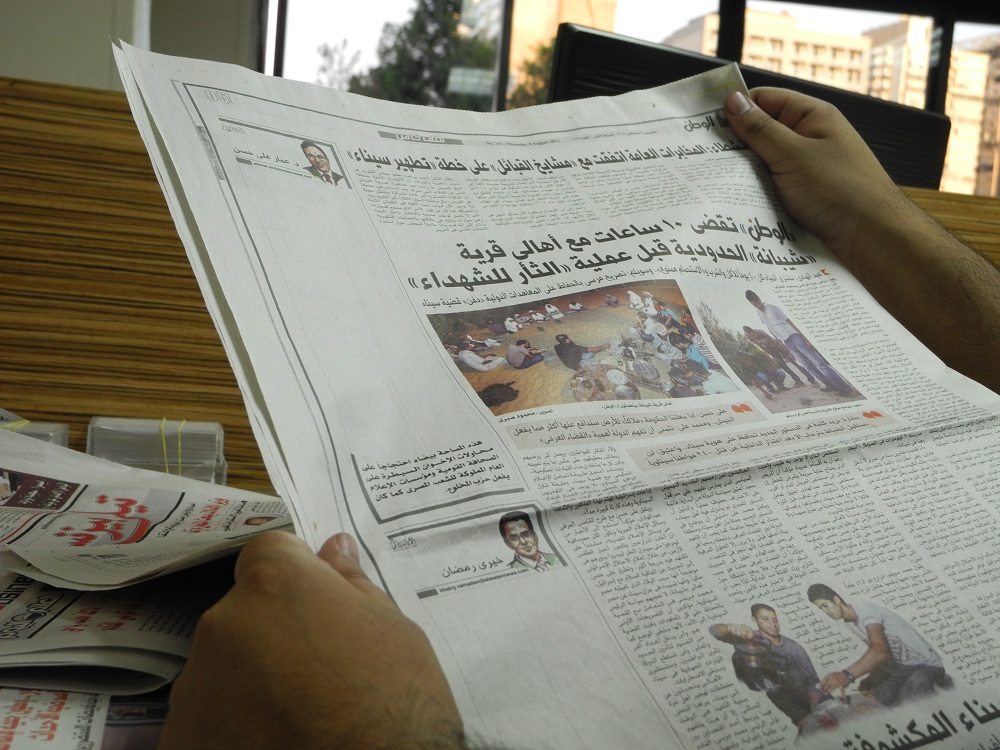 An assistant to the president has released a statement that questions the objectivity and the professionalism of the Egyptian media. The statement also denied the accusations that it used the courts to limit freedom of speech.

The statement was published on Saturday on the official Facebook page of Essam El Haddad, who is President Mohamed Morsy’s assistant on foreign relations.

It began by asserting that freedom of speech and the press are included in the constitution that was “approved by the majority of Egyptians.”

El-Haddad said that article 45 of the constitution safeguards freedom of speech in its entirety, and is backed by articles 48 and 49 which “safeguard press freedom, while providing constitutional guarantees against any violation of that right by stating ‘no law that regulates the practice of rights and freedoms shall include what would constrain their essence.’”

“President Mohamed Morsy’s administration will not condone any violation of the rights and freedoms enshrined in our nation’s new-born Charter,” El-Haddad added. “A violation of this article is not only unconstitutional; it also amounts to a violation of one of the fundamental demands of the 25 January revolution.”

The statement was released in response to a lawsuit filed against Bassem Youssef, often referred to as the John Stewart of Egypt, for insulting the president. The lawsuit was filed after an episode aired last December in which Youssef mocked President Mohamed Morsy by imprinting his face on a pillow cover and criticising an earlier speech.

The lawsuit was filed by lawyer Ramadan Al-Oksory, who said Youssef had insulted the president, his family and several members of the government.

El-Haddad said: “Neither the presidency nor the government pursued any legal action against the comedian.”

The statement also pointed out that the complaints made against Youssef “were mainly individual initiatives by independent lawyers.”

But Youssef’s lawsuit is not the only one of its kind. Since Morsy came to power, several people have been embroiled in legal action for insulting the president or the government.

Saad and Omar were accused of insulting Morsy on air, when Omar presented her psychological analysis on prison inmates and the president, a former political prisoner.

El-Shafaei was accused of insulting the president after she attacked him over the Presidential Palace clashes in December. Halim Qandil’s case hinged on comments he had made in October in an article that analysed the first hundred days of Morsy’s presidency.

Al-Badry was taken to court by the presidency’s legal affairs department on Saturday for allegedly publishing false stories.

Nada Kabbary, media officer of the Association for Freedom of Thoughts and Expression said: “Although the constitution doesn’t have a direct article that condemns anyone who criticizes the president, Article 179 from the Egyptian penal code is about the crime of insulting the president, which is a very elastic crime and there has been many debates on this since Mubarak’s era.”

In reference to the “individual initiatives” Kabbary pointed out, “it is well-known nowadays that most of these actions are taken by lawyers affiliated with Islamist groups.

“We are now reaching the largest number of legal actions against different media outlets and practitioners.”

Kabbary highlighted that there was no mention of Al-Badry in the statement. She said: “The presidential institution itself pursued the legal action against the journalist Al Badry and they also used a very elastic impeachment.”

El-Haddad warned that freedom of speech was not a license for defamation and circulation of rumours: “With freedom of speech comes responsibility to fellow citizens, and as the new constitution is put in practice, a balancing of rights will naturally and progressively follow,” he said.

The presidential statement called on “Egyptian media outlets and professionals to create a code for professional conduct in the media field to protect objectivity and credibility.”