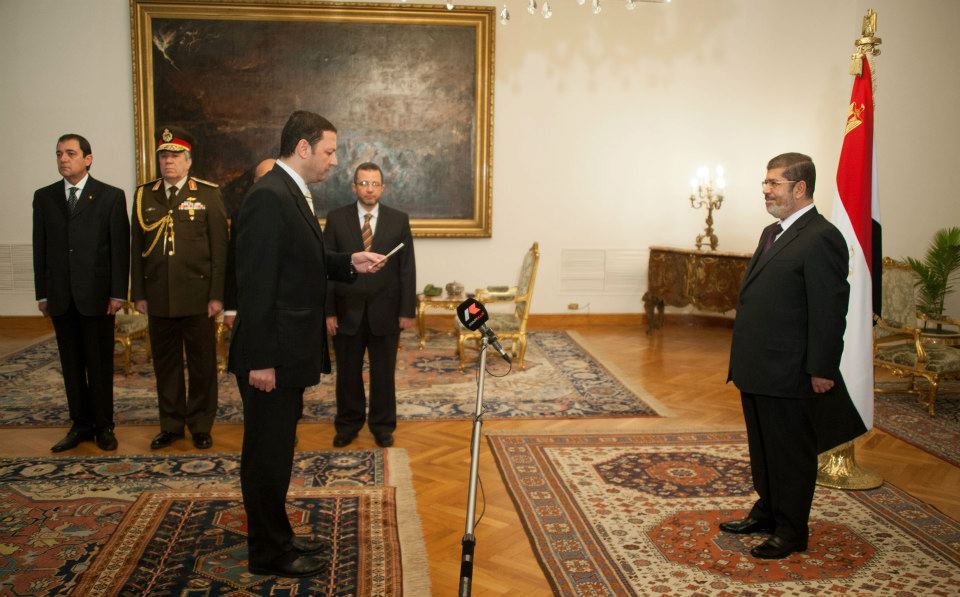 Ten new ministers were sworn in before President Mohamed Morsy Sunday, and four of them are known to be Muslim Brotherhood members.

Mohamed Bishr has been appointed as minister of state for local development. Bishr is the ex-governor of Al-Monofeiya. He is a senior member of the Muslim Brotherhood Supreme Guidance Bureau.

Ahmed Shabaan, another Brotherhood member, is the new minister of electricity.

Al-Morsy Al-Sayed Hegazy was sworn in as the new minister of finance. Hegazy replaced Momtaz Al-Said and is also known to be a Brotherhood member.

Wael Al-Maedawy is the new minister of civil aviation.

Mohamed Ibrahim Moustafa will replace Ahmed Gamal as the new minister of interior. Moustafa was the ex-assistant to the minister and headed Egypt’s prisons authority.

Khaled Abdel Aal is the new minister of environmental affairs.

Bassem Kamal, the final Ikhwan in the reshuffle, is the new minister of supply.

Atef Helmy is the new Minister of Communication.

Qandil told reporters: “President Morsy asserted the importance of working on improving the farmers’ stances especially during the agriculture season of wheat production.”

He added that the government would also start establishing a new electricity generating station, in preparation for the 2013 summer season.

“We still have challenges ahead. Achieving security stability is the key to economic stability.”

After the ministers’ meeting with Morsy, the Cabinet will meet to finalise discussions on the parliamentary elections’ law and send it to the Shura Council, which will transfer it eventually to the Constitutional Court.

Qandil said:  “This government does not serve the interest of a certain political party or group, but aims for the utmost benefit for the entire Egyptian society.”

He called upon all political groups to “coordinate on what helps Egypt to achieve economic development.”

On another note, the prime minister said a delegation from the IMF would arrive to Egypt Monday to discuss reasons for delaying the loan: “We will discuss with them the current Egyptian economic situation.

“The political road has its own technicalities, but the economic path is the one that we need to focus on.”