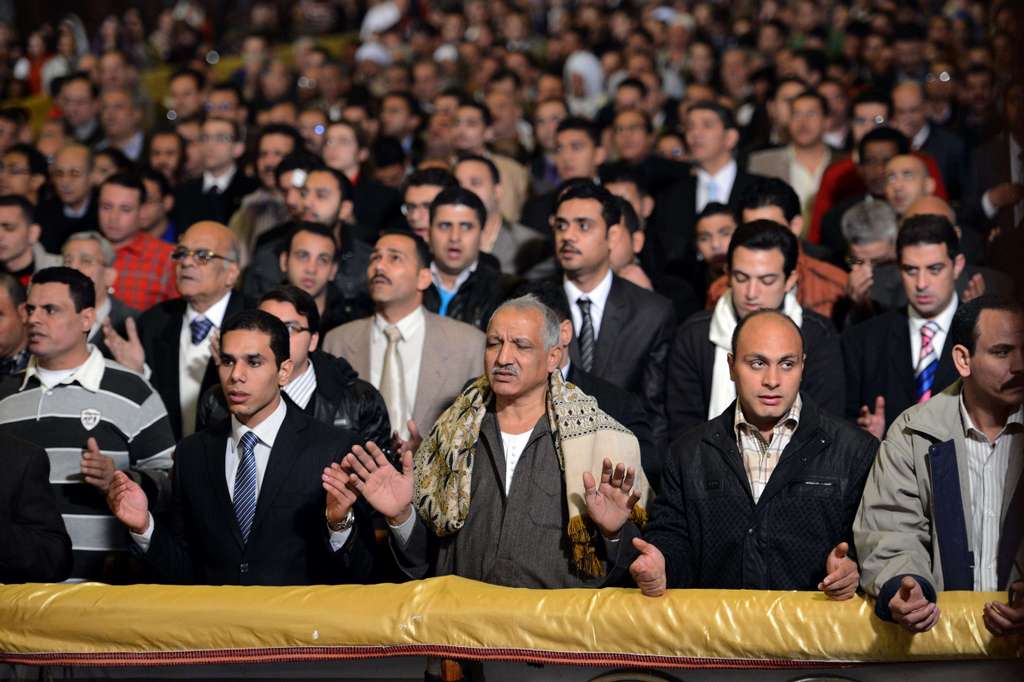 Inside an ordinary Egyptian apartment on the fifth floor of an old building in Cairo’s famous Ramses Street, 34-year-old Injy Alfons decorates a large Christmas tree with delightful ornaments and alluring lights. Mary, her 6-year-old daughter, tall for her age, is blowing up green and red balloons. Her older brother Martin sings Jingle Bells and constantly nags about his gift from Papa Noel. But as this Coptic family prepares for the Christmas in 2013, there is an abiding sense of uncertainty.

The 2013 Coptic Christmas is the first to come under the rule of an Islamist president and a newly selected pope.

“I cannot say that I am afraid of what could happen [politically] in Egypt. I am more concerned with the rise of the radical Salafis, who are spreading [their message] over YouTube,” said Emile, the father of two. He explained that the “radical” statements made by many sheikhs could drive the Coptic community to isolate itself even more from the rest of the Egyptian community.

Injy agreed. “If you find a whole group uniting against you as a minority, you will just have to stick to your own people and simply cocoon,” she said.

Al-Gamaa Al-Islamiya, the ultra-conservative Islamist group, has published on its Facebook page that Christmas is a “blasphemy.”  Youssef Al-Qaradawi, the Muslim Brotherhood’s mufti based in Qatar, warned Muslims against celebrating Christmas and said it would be “sinful for Muslims.”

Emile wishes for nothing more than a stable country. “After the selection of Tawadros II as our new pope, we just hope that promises from the government towards Christians are met,” he said. “Building new churches and the ability to even make slight maintenance should be resolved without [the need for] difficult procedures and licenses.”

The Coptic community has been suffering for years from laws that regulate the building of houses of worship. Copts are not allowed to build churches or conduct internal or external maintenance without official licenses.

“For me, I wish to be able to raise my kids in an atmosphere free of prejudice and discrimination,” Injy said. She highlighted that one of the challenges in Egypt is a lack of equal opportunities. “I see this in work places and schools. Sometimes employers would prefer Muslims to Copts and I don’t know the reason for this.”

Working as an accountant, Emile appeared more concerned with how to maintain a monthly income for his family. “With all the bad news about the economy every day, I sometimes ask myself what will happen to us as Copts, being a minority, if the country’s economic situation keeps getting worse.”

About a week before the Coptic Christmas, Emile took his wife and two kids to shop for the upcoming feast. “My mum picked a brown dress with red stripes for me to wear in the church. I also have new boots,” said Mary.

Christmas brings its own economic burden, said Emile. “I am already struggling to afford the household expenses and the increasing school fees for two kids,” he said. “As a Copt, I am not very optimistic about the administration of the Muslim Brotherhood.”

Hundreds of Egyptian Christian families fled to western countries after the 25 January Revolution. The rise of the tide of political Islam has unsettled many Christians in Egypt.

Although President Mohamed Morsy has repeatedly affirmed that Copts will be taken care of, no positive changes have been felt, Emile believes. “Everything is the same. No one single positive step has been taken for the sake of Christians in Egypt. [Morsy] appoints Coptic governmental figures just of the sake of appearing fair.”

Egyptian Church representatives withdrew in protest from the Constituent Assembly, meaning the new constitution passed without Christian representation. The Church has sent the presidency a list of desired changes to the constitution, including the deletion of Article 219, which assumes a strictly Islamist interpretation of the principles of Shari’a—the basis of legislation.

On 7 January of each year, Coptic children enjoy their church’s Christmas celebration. In schools and churches of all neighbourhoods, a man dresses up as Santa Claus and carries a large sack full of gifts to give out to children.

“I am waiting to attend the Christmas party at Al-Adra Fagala Church,” said Mary. “The priest told us this story of Santa Claus, who was given a lot of money from Jesus Christ to buy gifts for us.”

Martin said he received a set of toy cars at his school’s Christmas party as a Christmas gift. “I have parked all the cars for this Christmas. I wish that Papa Noel gives me another set of cars when I meet him in the church’s party.”

Mary and Martin spent weeks rehearsing special hymns for Christmas with their friends in the church. “My father always encourages me to sing in the church’s choir. We love Christ and so we sing for him on his birthday,” said Martin.

Preparations for the Christmas celebrations usually begin during the early days of the new year. Priest Rafael Wahba, serving at St Mark’s Abbaseya cathedral, explained that the Coptic Christmas “marks the annual commemoration of the birth of Jesus Christ and is one of the seven major holy feasts.”

In Egypt, Coptic Christians have several fasting periods that require different diets according to the celebration.

At Christmas, which is also called the Holy Nativity Feast, Copts stick to an approximately vegan diet, staying away from all meals that include chicken, beef, milk and eggs. They fast for 43 days starting from 25 November.

The fasting period is, however, not mandatory. Some people who cannot fast due to illness or weakness are excused. Fasting in Christianity does not intend hardship, but rather a spiritual preparation for the feast.

“We fast to spiritually welcome Jesus Christ in the heart,” said Father Rafael. “As if I tell him ‘come appear in my heart exactly like you appeared in the world’. I have to fast to feel how Jesus Christ has suffered pain for me and shared in the poor people’s suffering.”

The Christmas fast should not be confused with another fasting period at Easter, which lasts for 55 days in March or April, when Copts abstain from eating meat, chicken or fish. “This is called the Great Fast. We cannot eat anything that has a soul in it,” the priest explained.

On 6 January every year – Coptic Christmas Eve – Copts pour into churches in their neighbourhoods. In St Mark’s Christmas mass usually begins around 10.30pm, finishing at midnight. Chapels inside the cathedral start their prayers earlier than 10pm for the sake of the elderly and those who cannot stay late.

After Coptic families end their prayers on Christmas Eve, they gather for Christmas dinner. Injy said she arranges with her neighbours the main dishes to cook for Christmas. “We usually coordinate on what meals to cook. All of the food must contain meat and eggs and butter. We have to include all the yummy stuff.” Dining tables are usually set to be ready for families as soon as they return from church.

Emile said: “I usually take my small family and meet with friends and in-laws inside the church by the time of prayer around nine or 10.”

For Injy it is the best part; “it is when we really rejoice.” In the morning of 7 January, Christmas Day, families go out to celebrate and exchange visits.

Father Rafael explained there are a number of prayers conducted before the Christmas mass. The event commences when the pope enters the cathedral wearing his white Tonia and gold Sedra (liturgical vestments worn by the clergy), along with seven general Bishops and 12 priests. He starts the prayer of the “holy offering,” which is composed of bread and non-alcoholic wine. This practice is called “Divine Liturgy” and Christians believe that during it the wine becomes Christ’s blood and the bread his flesh.  There is a verse in the bible in which Jesus asks his disciples to symbolically eat and drink from his own body, by breaking bread and sharing wine.

Pope Tawadros II makes the sign of the cross three times over the bread and wine and then every bishop takes a small bite. The Divine Liturgy is equivalent to the Eucharist in Catholic and Lutheran churches.

Father Makary Habib, secretary to Pope Tawadros II, explained the practical preparations of the cathedral for the Coptic Christmas traditions. He said the cathedral started preparing for the festivities on 3 January. “We have about 500 young Christians responsible for organisation during the Christmas Eve service.”

The church’s youths are trained how to organise the entrance and exit of worshippers to ensure an organised event. The choir, which is led by Egypt’s most famous Coptic deacon Ibrahim Ayad, rehearses traditional hymns to be sung on Christmas Eve.

The Cathedral’s administration made plans for no more than 5,000 people inside the hall during the services. Doors were opened around 6pm and at around 10pm VIP guests are usually greeted by the pope.

More security for a merry Christmas

Enhanced security measures were in effect inside and outside the country’s many churches this year. Security barricades were placed at the entrance of the churches as well as closed circuit cameras and security screening machines.

On New Year’s Eve 2011, the All Saints Church in Alexandria was bombed, leaving 20 killed and more than 120 badly injured. The attack left a painful memory for Egypt’s Copts and many have since been scared to enjoy the festivities in churches.

Emile and Injy insisted their celebrations have to take place inside the church, despite fears of attacks on churches.

“The earlier attacks on churches have made us even closer to God. We will take our kids there and rejoice.”

Martin said he will stay with his father during the service and “will not care about any fears on that day. Jesus Christ will protect us.”

On Christmas morning the pope gives a speech to the Coptic community and welcomes governmental figures and well-wishers. This year, as expected, his motif was peace and love and a wish for a better Egypt.

Father Makary said: “priests all over the country pray a lot for Egypt to achieve freedom, social justice and democracy. We have always wished that for Egypt.”

Father Serafin Al-Syrian, one of the five candidates competing in the last papal elections, has a similar hope that “the future will be better than the present”.

“The church wishes that this year will bring peace to the country,” he said. “We can see that the pope is happy and enthusiastic about Christmas. We will follow his lead.”

How Egyptian Muslims celebrate the birth of Jesus