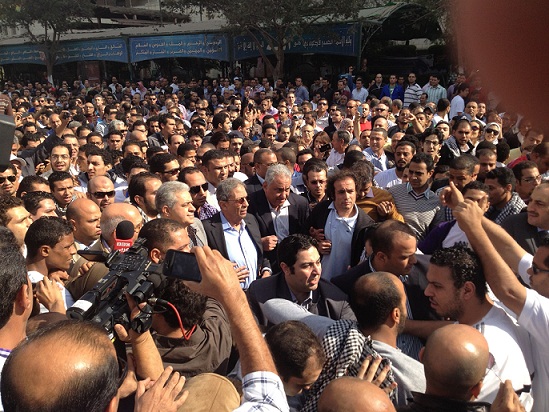 A US delegation is scheduled to arrive in Cairo on 17 January to meet with several political parties in a bid to strengthen relations between Egypt and the US. The delegation will be headed by republican Arizona senator John McCain and comprised of members of the senate and congress.

The delegation will be holding talks with several political groups and coalitions outside government, most notably the National Salvation Front (NSF).

A spokesperson for Amr Moussa’s Conference Party, which is a member of the NSF, confirmed that the front is preparing a committee to meet with the US representatives.

The NSF committee will be comprised of several members from different political parties, including the vice-president of the Congress Party and former Minister of Foreign Affairs, Mohamed Orabi.

The spokesperson said: “The delegation is interested in meeting all parties.”

He added that they were not in Cairo to broker any deals or to do business, but rather to gain a better understanding of the current political and economical situation the country is currently undergoing: “It is very important that we maintain a healthy relationship.”

NSF spokesperson Khaled Dawoud said it was important the NSF meet with the delegation, but had limited expectations: “This is a normal procedure for a delegation to meet all the political groups in Egypt.

“We will explain to them our point of view surrounding the current situation in Egypt, but we also are not calling for any foreign intervention or aid.”

Several leading Salafi figures have reportedly lashed out at the NSF for holding talks with the US delegation, saying the meeting amounts to treason, but such views are not universal among Islamist groups.

Absent from the talks is Al-Shaab, a Salafi party formed in October last year which places emphasis on Nubian, worker and farmer’s rights. Party spokesperson Ahmed Mawlana said there shouldn’t be great emphasis placed on the meeting.

Mawlana said:“[The NSF meeting the US delegation] is not a problem because the meeting was made public. If it was held behind closed doors this would raise questions, but this applies to everyone, not just the NSF.”