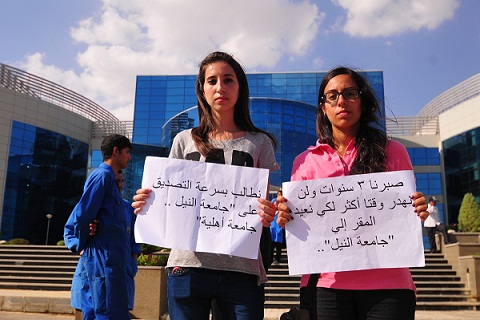 Nobel Prize-winning scientist Ahmed Zewail has urged the professors of Zewail Science City to withdraw reports they filed against Nile University students accusing them of sabotage.

Zewail Science City earlier released a statement accusing Nile University students of verbally assaulting the city scientists and their visitors and damaging a number of their cars Thursday, reported state-owned Al-Ahram. The alleged attacks took place while Zewail was laying the cornerstone of the Helmy Scientific Institute on land subject to an ownership dispute between Nile University and Zewail Science City.

Zewail said he was informed by the city’s legal team that the charge of intentionally destroying cars is punishable by imprisonment; a matter which caused him concern for the students’ future. He added that the students destroyed the cars in the presence of policemen and were photographed and identified.

“We did nothing of the sort,” Ahmed Nassar, head of the Nile University Student Union, said. “If he has any evidence against us, let him turn it in.”

Nassar stated that none of the Nile University students received notice of the reports filed against them. “I doubt that reports were filed at all,” Nassar said.

Nile University students claim they rallied around Zewail and the visitors he had invited in celebration of establishing the institute in an attempt to speak to them. “We were physically attacked by the city’s security guards,” Nassar claimed. The students also claimed Nile University researcher Mohamed Ismail Khedr was hit by Zewail’s car as it drove off.

“We didn’t file a report against Zewail because it seems to us he’s above the law,” Nassar said. He added that they have a video showing Zewail’s car hitting Khedr. The instant when Zewail’s car allegedly hits Khedr is not clearly depicted in the video.

Nile University students haven’t been allowed access to the disputed area, despite a court ruling giving them permission to use the university buildings. The dispute between Zewail Science City and Nile University has been ongoing for almost two years.