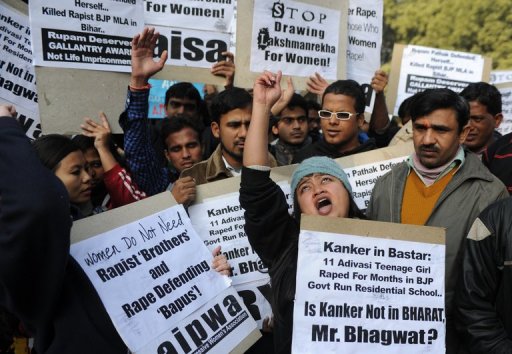 New Delhi (AFP) – Two of the five men accused of gang-raping and murdering a 23-year-old woman in a moving bus in New Delhi last month will plead not guilty to all charges, a lawyer said Tuesday.

“They will plead not quilty to all charges,” M L Sharma, who says he represents Mukesh Singh and Akshay Thakur, told AFP. “Nothing has been proven yet.”

Mukesh Singh, who is the brother of the bus driver Ram Singh, and Thakur are two of the five men charged with rape and murder over the 16 December attack on the young student, which has fuelled fierce protests across India.

A sixth accused, who is 17, will be tried in a separate court for juveniles.

Officials at Tihar jail, the maximum security prison where the accused are held, confirmed that Sharma had met the two defendants Tuesday.

Police earlier told reporters they have identified bloodstains linking the men to the attack but the advocate said he would challenge police over their handling of evidence, while refusing to give details.

The next hearing, to be held behind closed doors, has been scheduled for 10 January when a magistrate is expected to transfer the case for trial in a special fast-track court.