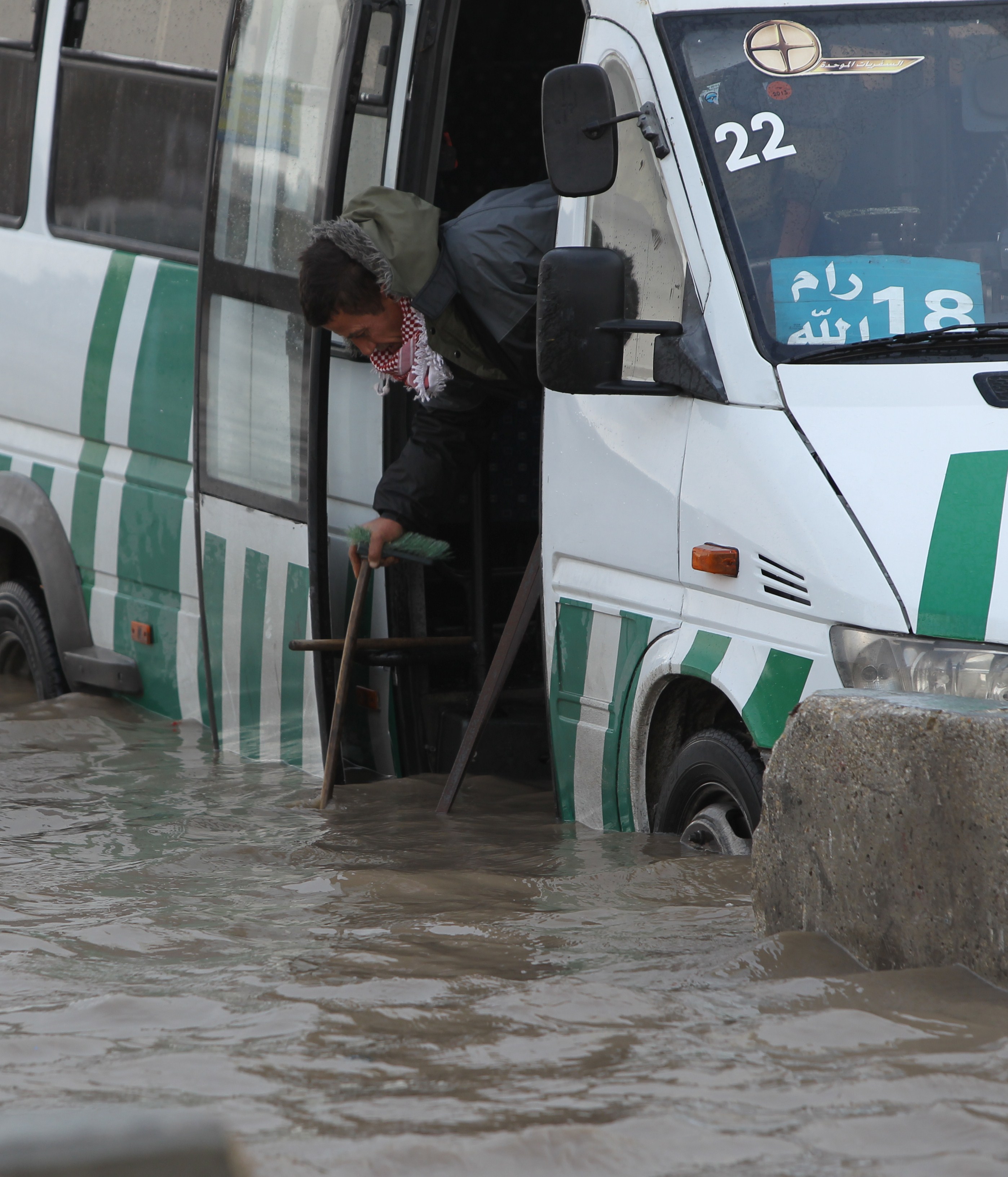 Ramallah, Palestinian Territories (AFP) – Abnormal storms which for four days have blasted the Middle East with rain, snow and hail have left at least nine people dead and brought misery to Syrian refugees huddled in camps.

In the latest incidents, officials reported that two women were found dead in the West Bank on Wednesday after their car was swept away in floods, while a 30-year-old man froze to death in Taalabaya, in Lebanon’s Bekaa province, after he fell asleep drunk in his car.

Snow carpeted Syria’s war-torn cities but sparked no let-up in the fighting, instead heaping fresh misery on a civilian population already enduring a chronic shortage of heating fuel and daily power cuts.

With snow falling in the West Bank city of Ramallah, wintry weather was also forecast for Amman and Jerusalem, and the polar air mass moving down from Russia sent temperatures plummeting as far south as Cairo.

Torrential rain since Sunday in a region unaccustomed to such deluges has sparked widespread flooding that has led to school closures, transport chaos and helicopter evacuations from homes and cars.

Met offices warned that the below-normal temperatures threatened to turn the accumulated water to black ice and in Jordan police warned against all but essential travel as traffic accidents multiplied.

In Syria, state television broadcast regular live reports from the snow-covered streets of the capital, while activists in the battleground city of Homs posted images of a mosque in a rebel-held neighbourhood cloaked in white.

There was no respite for civilians from the 21-month conflict, however. Four children from the same family were among as many as 10 civilians killed in a pre-dawn air strike in a village just outside Homs, a watchdog reported.

Conditions were little better for Syrian refugees in neighbouring Lebanon, where flooding and wintry conditions prompted the UN refugee agency to begin moving those living under canvas.

“With this very harsh weather, shelters have been threatened and now that snow is hitting the Bekaa people are really in need of assistance,” UNHCR external relations officer Cecile Fradot told AFP.

“Today we are relocating families whose shelters have been flooded in the north,” she said.

“The situation is going to get worse, this is just the beginning of the winter.”

The two women found dead near the northern West Bank city of Tulkarem, one from the ancient Samaritan community,  had been posted as missing since Tuesday night. A third passenger, believed to have been the taxi driver, was retrieved alive but was reportedly in serious condition.

The women’s deaths, as well as that of the man who froze to death in Lebanon, has raised to nine the fatality toll reportedly linked to the weather since Sunday.

An Israeli army spokeswoman said that on Tuesday, soldiers helped evacuate a bus carrying 30 Palestinian children, as well as an ambulance stuck in floodwaters in the Jenin area of the northern West Bank.

On the Israeli side, army helicopters were used to rescue people from roofs and the tops of cars, and some 300 families from Bat Hefer, north of Tel Aviv, were evacuated from their homes after the nearby Shekhem River burst its banks.

In Jordan, the government declared Wednesday a public holiday due to the icy weather.

Police said many main roads were closed, advising people “not go out unless necessary,” as the hazardous driving conditions caused more than 700 traffic accidents in the space of 48 hours.

In Lebanon, schools remained shut nationwide for a second straight day, as a meteorologist at Beirut airport reported 5.5 cm of rain in 24 hours.

In the mountains above the capital, 10 cm of snow fell as low as 400 metres.

In Egypt, the search went on for 10 fishermen posted missing off the coast, while the port of Alexandria remained closed for a fourth straight day, state media reported.