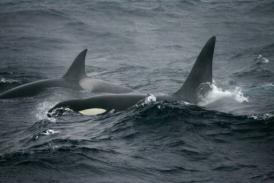 (AFP) — Twelve killer whales could be in imminent danger after getting trapped by ice in the Hudson Bay off the shore of northern Quebec, the Canadian broadcaster reported.

Video posted on the CBC website showed the giant sea mammals taking turns to breathe by popping up through a small patch of open water amid fields of white ice.

But Tommy Palliser, who traveled from the small Inuit village of Inukjuak, about 30 kilometers (19 miles) from where the whales are trapped, said the hole is shrinking, creating a dangerous situation for the creatures who live underwater but need air to survive.

The federal government is sending a team of experts Thursday to investigate whether and how the whales can be saved.

Inukjuak mayor Peter Inukpuk called for the government to send an icebreaker to create a route for the whales to open water.

It should be possible, he told CBC, saying the Hudson Bay only froze over two days earlier and the ice is “not thick, thick as in previous years.”

He said the whales appear to be aware of their predicament.

“It appears from time to time that they panic,” he said.

“Other times they are gone for a long time, probably looking for another open space, which they are not able to find.”

But a department of fisheries official said it would be costly and complicated to send an icebreaker — since the machines are being used extensively and are not nearby. And even if one is sent, it may not arrive in time.

Experts told the broadcaster it is not uncommon to find whales trapped in a frozen sea, a situation that can often lead to death for the animals.