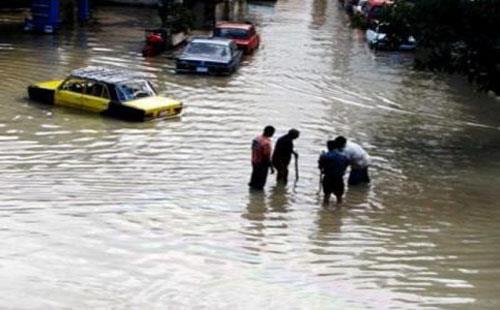 The protest was held outside the sanitation company in the coastal city.

Among the groups that took part in the protest on Wednesday was the Kefaya movement. Abdel-Rahman Al-Gohary, the media spokesperson of the movement, said the lack of action by executive bodies has left the streets  “paralyzed.”

Al-Gohary said although this was not the main reason behind the protest, protesters ended up chanting against the governor of Alexandria and the deputy governor.

Reports that a sit-in was held after the protests were denied by Abdel-Rahman.

Also on Wednesday, Tahrir Doctors released a statement calling for the rescue of Egyptian cities that are “drowning and have been besieged by rain.” In various cities across the country,  “water levels have reached half a metre in the drowning streets,” according to the group.

It objected to the inability of people to move to get food or receive medical care because of the rain. Tahrir Doctors also expressed fears of possible deterioration in the conditions should the electricity, gas and telephone networks be affected.

The group called on all state officials and institutions to intervene quickly, especially in Alexandria to drain the water. It demanded the formation of a special administration to manage crisis and disasters, to avoid a similar crisis in the future.

It also called for providing a hotline to contact for requesting food, drugs and rescue boats. Finally, it appealed to medical workers in the region to form local committees to provide medical care and humanitarian aid to people around them.