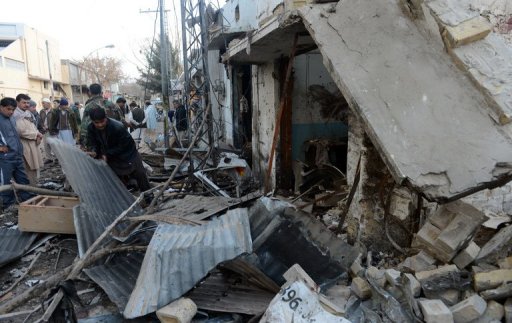 AFP – Extremist bomb attacks killed 125 people in one of Pakistan’s deadliest days for years, raising concerns Friday about rising violence in the nuclear-armed country ahead of general elections.

Two suicide bombers killed 92 people and wounded 121 after they targeted a crowded snooker club in the southwestern city of Quetta Thursday, in an area dominated by Shi’a Muslims from the Hazara ethnic minority.

Extremist Sunni militant group Lashkar-e-Jhangvi claimed responsibility for what was the worst single attack ever on Shi’as, who account for around 20 percent of Pakistan’s 180 million population.

It was the deadliest attack in Pakistan since twin suicide bombers killed 98 people outside a police training centre in the northwestern town of Shabqadar on May 13, 2011 — shortly after US troops killed Osama bin Laden.

Earlier Thursday, a bomb detonated under a security force vehicle in a crowded part of Quetta, killing 11 people and wounding dozens.

A bomb at a religious gathering in the northwestern Swat valley killed 22 people and wounded more than 80, the deadliest incident in the district since the army in 2009 fought off a two-year Taliban insurgency.

At the snooker club, the first bomber struck inside the building then, 10 minutes later, an attacker in a car blew himself up as police, media workers and rescue teams rushed to the site, said police officer Mir Zubair Mehmood.

“The death toll is now 92. Some bodies were found from the blast site today,” said police official Hamid Shakeel. He said all but five of the victims had been identified and handed over to their families for burial later Friday.

Nine police, three local journalists, several rescue workers and a spokesman for the Frontier Corps paramilitary were among those killed, officials said.

The government has announced three days of mourning in Baluchistan, and compensation of two million rupees ($20,560) to families of killed police officials and one million rupees to those of civilians.

Lashkar-e-Jhangvi claimed responsibility in telephone calls to local journalists. The group has links to Al-Qaeda and the Taliban, and was involved in the kidnap and beheading of reporter Daniel Pearl in January 2002.

The attacks, coupled with violence in the northwest, revived warnings from analysts that an Islamist militancy could threaten national elections, expected sometime in May after parliament disbands in mid-March.

Polls would mark the first time an elected civilian government in Pakistan, for decades ruled by the military, completes a term in office and is replaced by another democratically elected government.

“The government is completely losing control over the situation. Events are taking place one after the other,” security and political analyst, retired lieutenant general Talat Masood told AFP.

“The disturbing law and order situation will have a very adverse effect on elections. The government seems to have no plans for security and nothing is being done for the safety of people who are being killed like flies.”

But a senior official in the Quetta administration, Mohammad Hashim, denied sectarian violence had any bearing on elections.

“Incidents of sectarian violence have been taking place in the country for more than a decade. It may have an affect on law and order. I don’t think it will have an impact on elections. It’s not political, it’s sectarian,” he said.

Human Rights Watch said 2012 was the deadliest year on record for Shi’as in Pakistan and the government’s failure to protect them “amounts to complicity in the barbaric slaughter of Pakistani citizens”.

Baluchistan has long been a flashpoint for attacks against Shi’as and Hazaras, and suffers from a separatist insurgency and Islamist militancy linked to a domestic Taliban insurgency concentrated in the northwest.