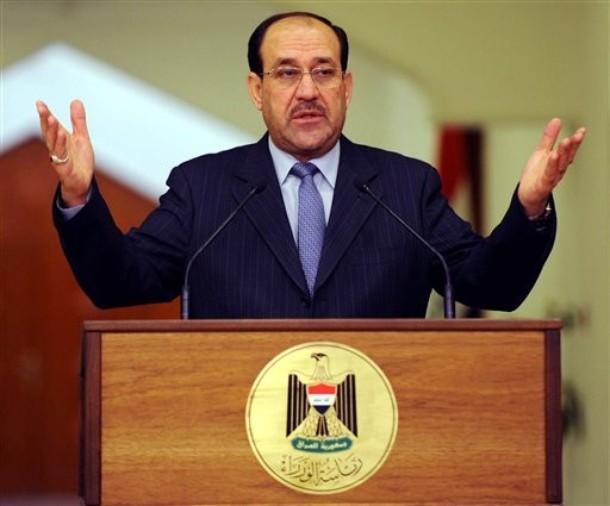 (AFP) – Hundreds of demonstrators rallied in central Baghdad backing Prime Minister Nouri Al-Maliki on Saturday as the latest in weeks of anti-government rallies in Sunni areas of Iraq called for him to quit.

The demonstrations have worsened a political crisis, pitting Maliki against his erstwhile government partners, with the premier facing accusations of authoritarianism and sectarianism ahead of key provincial polls.

At Tahrir Square in the heart of the capital, demonstrators held up posters of the prime minister alongside banners that read: “I am Iraqi, I love Maliki,” and: “We strongly support Nouri Al-Maliki,” while many shouted in unison: “All the people support Nouri al-Maliki.”

Other banners blamed parliament speaker Osama Al-Nujaifi, a Sunni Arab opponent of Maliki, for militant attacks and slammed calls in anti-government protests for a wide-ranging prisoner amnesty and reform of anti-terror laws.

In a sign of increasing sectarian rhetoric at the demonstrations, many demonstrators held up banners describing themselves as “followers of Hussein,” a revered figure in Shi’a Islam, and a speaker led the crowd in chants of “Labeika Ya Hussein,” or “We will follow you, Hussein”.

“In the names of all the martyrs, the victims, the widows, we call on the government not to cancel Article 4,” said one protester, a 67-year-old who gave his name as Abu Hussam, referring to anti-terror legislation.

He said that his son was killed by gunfire in west Baghdad in 2006, adding: “He was 20, I was about to get him married. For six years, I have not slept, I hope one night I can sleep.”

Meanwhile, anti-government rallies blocked a key highway linking Baghdad to Jordan and Syria for a third week, while protests were also held in Samarra, Tikrit, Baiji and Mosul, all Sunni-majority areas north of the capital.

In the longest-running of the protests, in western Anbar province, tribal leaders called for Maliki to resign.

The prime minister has threatened to direct security forces to intervene in the protests, which were sparked by the December 20 arrest of at least nine guards of Sunni Finance Minister Rafa Al-Essawi.

Essawi is a leading member of the secular Sunni-backed Iraqiya bloc that, while a member of Maliki’s unity government, has called for him to quit.