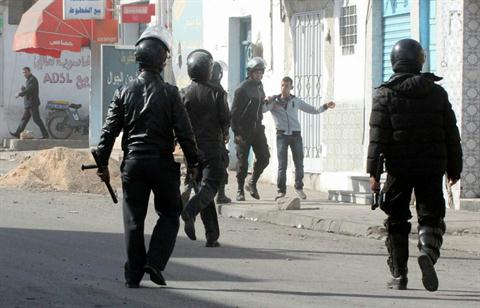 (AFP) – Clashes again broke out on Saturday between residents and police in Ben Guerdane near Tunisia’s border with Libya after nearly a week of demonstrations over poor living conditions.

Ben Guerdane, around 30km from the border, has witnessed sporadic unrest since Sunday, fuelled by Tripoli’s decision to close the Ras Jdir border crossing in early September for security reasons.

Dozens of youths, many of them masked, gathered outside the police station which was torched on Thursday and threw stones at police who responded with tear gas, an AFP journalist reported.

The local headquarters of the ruling Islamist Ennahda party were also ransacked this week.

“Ben Guerdane is Free! [Prime Minister Hamadi] Jebali out!” the protesters chanted of the government in Tunis, two days ahead of the second anniversary of the revolution that sparked the Arab Spring.

The latest demonstration came as representatives of the authorities, trade unions and local tribes met in Ben Guerdane in an attempt to thrash out a solution to the crisis.

But Amar Hamdi, who heads the local branch of Tunisia’s main trade union confederation, the UGTT, said the talks had foundered and blamed the government.

“The authorities say this is a security problem, but we want development projects” for the region, Hamdi said, denouncing the fact that “no member of the government has come to Ben Guerdane to try to resolve the problem.”

Despite the crossing being reopened on Thursday, the local UGTT branch went ahead with a general strike in the border town to demand investment and jobs, with only chemists, hospitals and bakeries remaining open.

There is ongoing social discontent in Tunisia two years after the uprising that overthrew ex-dictator Zine El Abidine Ben Ali on January 14, 2011, with strikes and protests often degenerating into violence.

Unemployment and tough living conditions were key factors behind the revolt that touched off the Arab Spring, whose second anniversary will be celebrated on Monday.

Violent attacks by Islamists and political deadlock over a new constitution also continue to threaten the country’s stability.