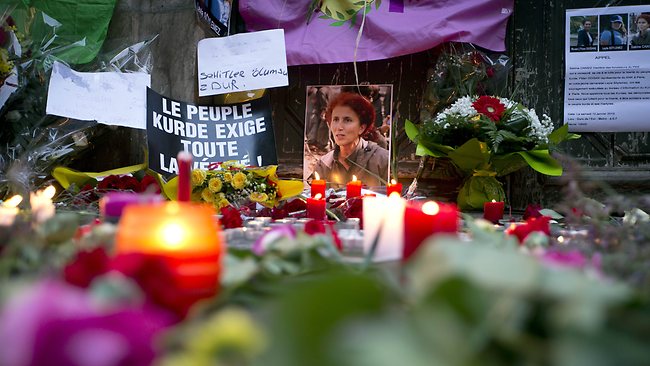 (AFP) – Turkish Prime Minister Recep Tayyip Erdogan called on France on Saturday to “immediately” clarify the killing of three Kurdish activists who were shot dead in Paris, while asking French President Francois Hollande to explain why he was meeting with members of the outlawed PKK.

“France must immediately clarify this incident,” Erdogan said in televised remarks. “Also, the French head of state must explain immediately to the French, Turkish and world public why … he is in communication with these terrorists,” he added.

Hollande had said the murder of Sakine Cansiz, Fidan Dogan and Leyla Soylemez was “terrible,” adding that he knew one of the Kurdish women and that she “regularly met us.”

The three were found dead on Thursday at the Kurdistan Information Centre in the French capital’s 10th district, after last being seen alive at the centre at midday on Wednesday.

Cansiz was a founding member of the Kurdistan Workers’ Party (PKK), which took up arms in 1984 for Kurdish self-rule in southeastern Turkey and is branded a terrorist organisation by Ankara and much of the international community.

The separatist PKK warned that it would hold France responsible if the killers were not quickly found, as Ankara said the slayings bore the hallmarks of an internal feud, noting that the victims appeared to have given the killer or killers access to the centre.

Erdogan repeated on Saturday that an internal feud in the PKK was most likely behind the slayings and upheld his earlier suggestion that the slayings could be aimed at derailing peace talks between Ankara and the PKK’s jailed leader, Abdullah Ocalan.

“For God’s sake, I’m asking. Is this terrorist organisation innocent? Hasn’t it carried out such executions thus far?” said Erdogan.

“God willing, this problem will be resolved: today or tomorrow, sooner or later,” he added.

“We are proceeding in a determined fashion. We are hopeful, optimistic and looking positively to the process but we are at the same time cautious and careful.”

The killings came days after Turkish media reported that Turkey and the PKK leadership had agreed a roadmap to end the three-decade old Kurdish insurgency that has claimed more than 45,000 lives.

The deal was reportedly reached during a new round of talks between Ankara and Ocalan, which the government acknowledges have been taking place with the aim of disarming the rebels.