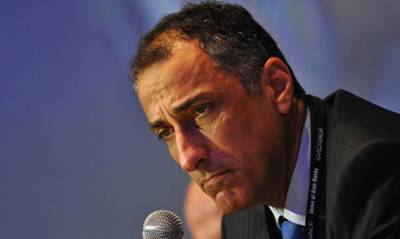 Tariq Amer has presented his resignation as president of the National Bank of Egypt (NBE), nearly two years before his term was scheduled to end in November 2014.

He said in an email that was sent to all of the bank’s employees that he is resigning after having spent five years as the bank’s president, years that were “characterised by love and friendship.”

News of the move was met with mixed reactions from within the bank that had witnessed a jump in its performance during the five years that Amer was president. A number of veteran employees, who had previously protested against Amer’s policies, particularly those regarding his handling of human resources, said that they were happy to see him go.

Abd Al-Moneim Anwar, an accountant with the NBE, said that many employees were indeed happy to hear the news, and that they hoped to also see the resignation of a number of other senior leaders hired by Amer when he joined the bank in 2008. Many said that they felt as if they had been sidelined in the interest of protecting Amer’s “entourage”.

On the other hand, a number of the bank’s leaders from various branches and provinces descended upon Cairo in an attempt to convince Amer to take back his decision.

Husseinn Al-Rafa’a, the bank’s financial director, said that a general sense of sadness and fear had descended upon the bank’s employees upon receiving Amer’s email. He added that many of his colleagues from different branches planned to show up at the bank’s headquarters in an attempt to convince Amer to take back his resignation. Amer however rejected these appeals, saying that right now Egypt did not need any more protests, and that his decision was personal.

One official within the bank attributed Amer’s desire to resign to ongoing conflicts between him and the central bank’s new President Hisham Ramez, reflecting the deteriorating relationship between the two institutions.

Amer previously expressed within the last year his desire to resign, linking his decision to that recently made by Farouk  Al-Okda, previous president of Egypt’s central bank.

Amer’s resignation is scheduled to go into effect at the beginning of next month.

The NBE underwent widespread reform during Amer’s term that led to widespread changes in both its financial and administrative structures. The bank’s restructuring had a large impact on 60 of its primary business dealings.

During Amer’s presidency the size of the bank nearly doubled as its market share increased, enabling it to close massive allocations gaps estimated to have totaled nearly EGP 10bn. During his term, the NBE had become the most profitable bank on the Egyptian market, with its profits from the previous fiscal year ending in June 2012 totaling EGP 2.5bn. From 2008 to the present, the bank’s capital increased from EGP 2.25bn to EGP 9.4bn, becoming the largest tax payer in Egypt’s financial sector.

However Amer’s term was not always characterised by love and friendship, as his policy of hiring foreigners to many of the bank’s leadership positions angered a number of veteran employees, whose numbers total more than 15,000.

Employee anger exploded nearly two years ago when a number of workers surrounded Amer’s office and demanded his resignation in addition to that of a number of senior employees. Many claimed that their anger stemmed from the massive income inequality that existed between the salaries of veteran Egyptian employees and their foreign counterparts. These protests led to the NBE’s banking systems shutting down for three days before the central bank moved to contain the crisis. In his email, Amer went on to say that his five years spent at the NBE had left a mark on his career, and that in the future he saw the bank serving as a beacon for the whole Arab North Africa region.