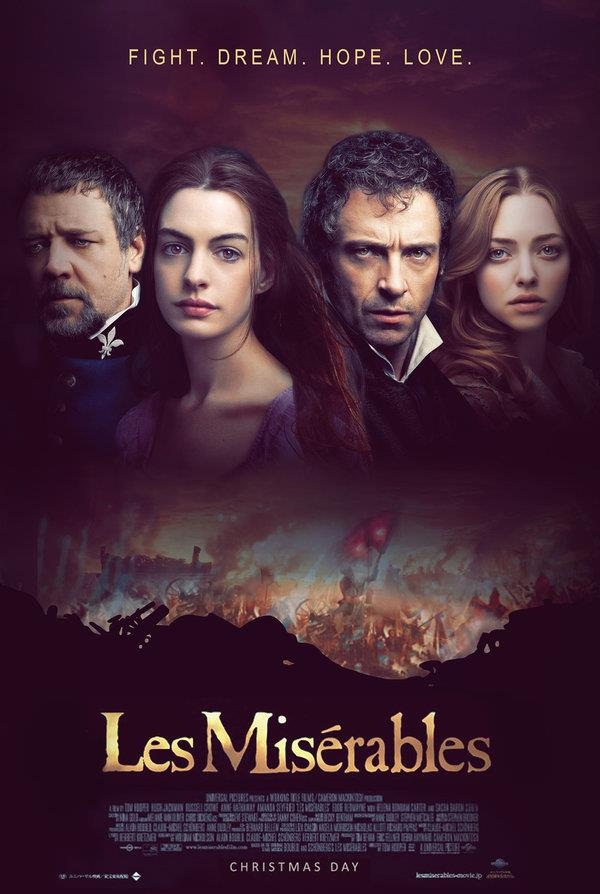 A film based on a musical based on a book. We have no idea how this worked but apparently it did. Even with a singing Jackman in the mix, the film manages to convey the spirit of the musical it is based on.

Though not without its flaws, the film’s performances and theatrical bravado will impress those who like their films with an epic feel.

The film’s famous plot revolves around an endless cast of characters in 19-century France where Jean Valjean (Jackman) and Fantine (Hathaway) cross paths and their lives change against the backdrop of an important period in French history.

Unfortunately, those who are not into tunes will find it difficult justifying listening to Hathaway and Jackman sing at each other and fans of the book may feel the same way.

Anthony Lane of The New Yorker said: “Fans of the original production, no doubt, will eat the movie up, and good luck to them. I screamed a scream as time went by.”

Bottom line: in terms of Hollywood impersonating theatre impersonating literature, this is probably as good as we’ll see this year.

Though the release of Midnight’s Children no doubt enhanced Lee’s efforts as critics compared the two and hailed the latter over the former, the film stands on its own as a successful book-to-film adaptation.

The somewhat surreal plot follows Pi Patel, whose family owned a local zoo in India, as he recounts his story to a local novelist as an older immigrant in Montreal. The story revolves around his 16-year old self when he was stranded on a boat in the Pacific ocean with a Bengal tiger, whom he forms a connection with.

Especially lauded for its technical and visual elements, the film is based on a book many thought to be essentially “unfilmable”, earning Lee another Oscar nomination.

Joe Morgenstern of the Wall Street Journal said, “Mr. Lee’s film is stronger as a visual experience-especially in 3-D-than an emotional one, but it has a final plot twist that may also change what you thought you knew about the ancient art of storytelling.”