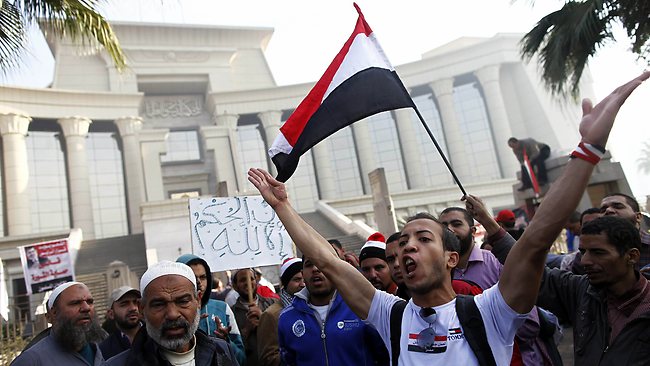 Revolutionary groups and parties plan to hold marches to the Supreme Constitutional Court where they will hold a sit-in to “protect the judges”.

The marches and gathering outside the court are planned for Monday evening, one day before the court reads the verdict on the legality of the Shura Council and the Constituent Assembly which drafted the constitution.

Hossam Fouda, the secretariat of the youth at the Free Egyptians Party, one of the parties calling for the gathering, said: “No matter what the verdict is… we are in favour of the full independence of the judiciary and in the judges’ right to carry out their jobs.”

Fouda said unfortunately the executive authority is not carrying out its role which is why they have resorted to such measures.

Abdel-Ra’ouf said the point of the gathering is to send a message to the judges: “You were scared and we are supporting you.”

Najla Abdel-Gawad from 6 April Democratic Front said the political group will not take part in the protest on Monday but will gather outside the court on Tuesday noon.

The Popular Current said the point of the gathering is to protect the court and judges from the “Muslim Brotherhood militias who have besieged it before.”

In response, Ahmed Sobei, the media spokesperson of the Muslim Brotherhood’s political arm the Freedom and Justice Party said the idea of someone protecting someone else is not a logical idea. “I want to remind these parties that they were against gathering outside the court,” he said, adding that it is a right for the opposition as well as anyone else to gather.

In early December, supporters of President Mohammed Morsy occupied the vicinity of the court, one day before the announcement of the verdict on the case deciding the future of the Shura Council and Constituent Assembly. The gathering forced the judges to suspend work for nearly a month.

When the judges officially reconvened, they decided that the verdict on the postponed case would be announced on 15 December.

After the People’s Assembly was dissolved, the Shura Council which is the upper house of parliament remains Egypt’s only legislative body.