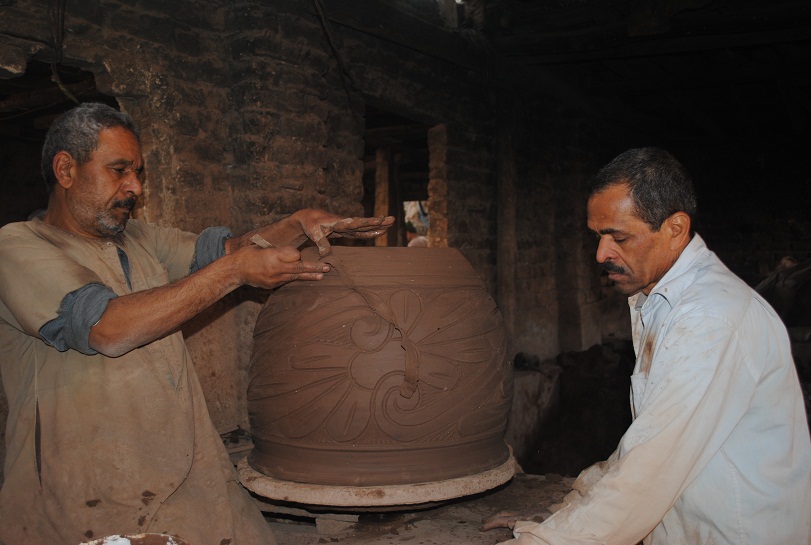 Behind the modern high towers on the Corniche in Maadi, at the foot of the Al-Moqattam hill, lies a slum that is the home to an ancient profession that goes back to the beginning of  Egyptian culture.

Batn El-Baqara may look like an ordinary slum, part of the darker side of Cairo, but in reality the whole area is teeming with potters and potteries.

The pottery workshops still function as they have for millennia, the same objects and devices are being used and the kilns are still fueled by wood and rubble.

The workshops bring the silt, their raw material, from Aswan. The transformation from silt into clay takes several stages.  First the silt is ground, after which it is dipped in large basins of water to moisten it. Then the silt is collected and rubbed thoroughly to soften it so it can be shaped. After this process the silt is transformed into wet pieces of clay.

Anwar, 48, has been a potter for years, longer than he can remember he says. His limbs move in perfect harmony as his legs keep the pottery wheel spinning as his hands shape a lump of clay. It seems his hands barely touch the raw clay, yet it turns magically into a real work of art, an action that appears to be easy, but in fact takes years of practice.

After the pots are shaped they are etched with different patterns, fired in the Dolab, an old-fashioned kiln, and finally they are coloured. Anwar feels he is fortunate to still work in his profession, as many of his peers had to abandon their work after they were expelled by the security forces from their old houses and workshops which were somewhere near Batn El-Baqara. Anwar used to have his own workshop in the old area, but after the move he was obliged to work for others.

The pottery that is manufactured is mainly for the tourism sector; most of the production is currently used for decorating tourist resorts and villas.  Among Egyptians there is no longer a demand as before. ”People now prefer to buy plastic and Chinese materials over crockery,” said Mahmoud, a pottery workshop owner.

Seven years ago the government launched a project to resettle the original potters and new workshops were built for them. Mahmoud said that most of refused to swap their old workshops for the new ones though, because the new workshops were not as well made and it was too costly to get gas and electricity connected.

The name Batn El-Baqara means cow’s stomach in Arabic and the area gained the name because it looks like that on a map. Anwar has another opinion though: He thinks that the area was named that because it is a narrow and stuffy place that lies between two high hills and is crammed with many people and housing blocks.

Pottery, as Anwar said, is among the oldest professions, but it looks to be a dying trade.  Business is declining due to economic factors, in particular the decline of tourism in Egypt after the revolution. In order for this ancient craft to survive it needs more support from both the government and buyers.