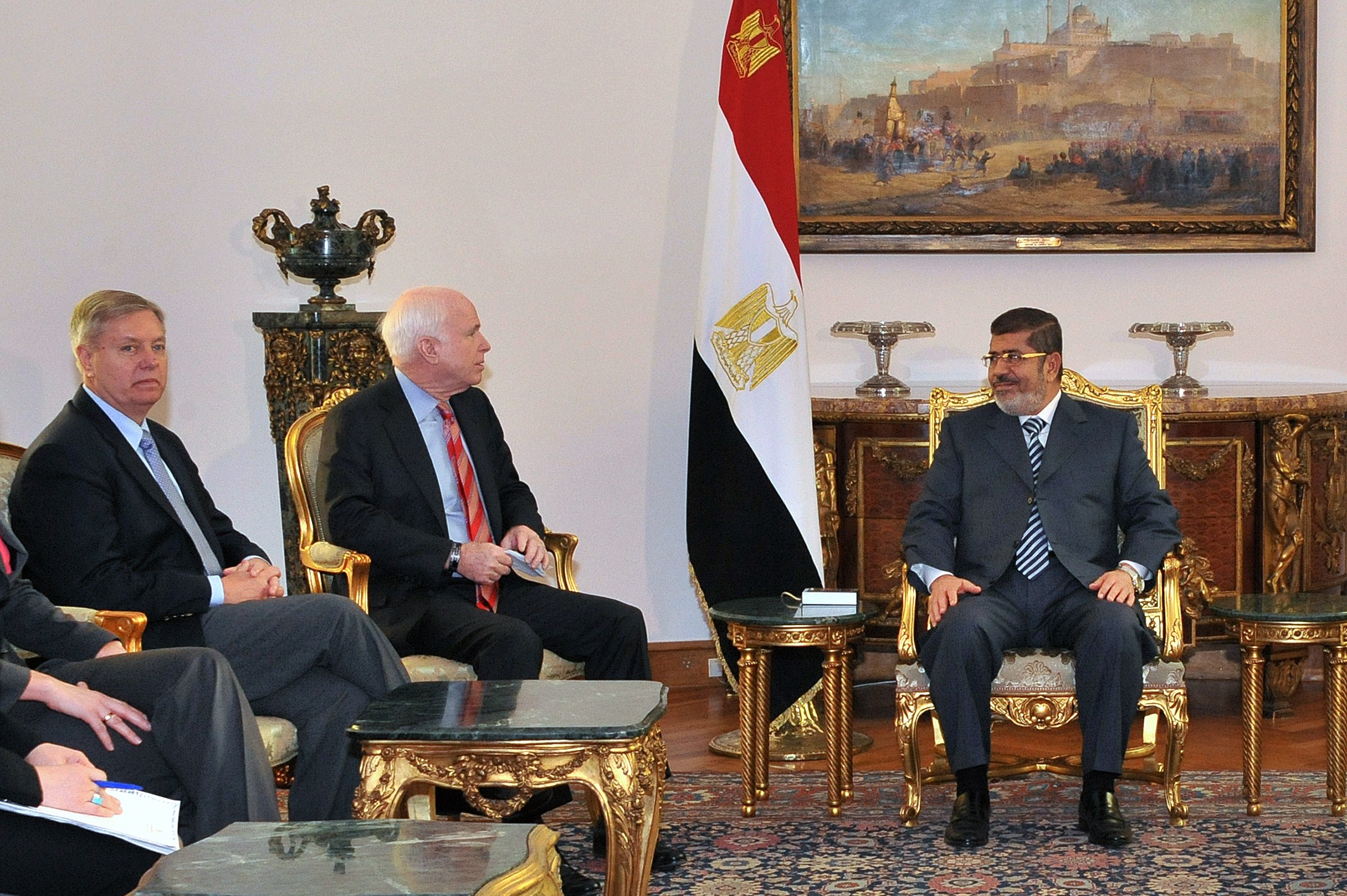 Presidential assistant on foreign affairs Essam Al-Haddad, who held talks with US officials last December, attended the Wednesday meeting. Foreign minister Mohamed Amr was also present, as well as a number of Egyptian officials. Morsy is supposed to travel to the US in February.

In a press conference, presidential spokesperson Yasser Ali said talks between Morsy and the US delegation of seven senators included US efforts to support Egypt “generally” at this stage, but did not tackle details on economic assistance.

The delegation affirmed its desire to bolster partnership between the two countries. McCain said that the Egyptian revolution provided an opportunity for the US to “re-cast the US relationship with Egypt, to make it a truly strategic partnership.”

The senators emphasised US support for a democratic transition that involves all aspects of society.

The delegation also expressed concerns over the constitution, they all emphasised the need for the constitution to be amended in order to secure the rights of women and religious minorities.

One message that the senators will take back to the US is a call to invest in Egypt. But it was quickly pointed out that this is difficult task in the current global economic climate.

One senator said: “To make sure the American people understand how important it is to invest in Egypt the Egyptian people are going to have to show-case your best behaviour.” He pointed to the need for Egypt to show “that there is a process to amend the constitution.”

The senators also stressed that a loan agreement with the International Monetary Fund would help this process.

Ali said: “McCain said he is looking forward to meeting with Morsy in the US congress during his upcoming visit to Washington.”

The US delegation placed emphasis on security in the Sinai and pledged to provide all the help that it can to secure the peninsula. It was stressed that the security of Israel is a major US priority.

Before meeting with Morsy, on Wednesday morning McCain, the 2008 Republican presidential nominee, met with Mohamed ElBaradie, president of Al-Dostour Party and Amr Moussa, the ex-presidential candidate and head of the Conference Party.

Rania Azab, spokesperson for ElBaradie, said McCain along with six other senators met with the Nobel Prize Laureate separately: “They discussed economic and political developments in Egypt.”

The delegation also held meetings with a number of parliamentarians, opposition figures, and members of the National Salvation Front, Egypt’s largest opposition bloc.

Mohamed Al-Oraby, ex-foreign minister and a member of NSF, said: “We have spoken with McCain on the current economic developments in Egypt and our preparations for the upcoming parliamentary elections.

“We are unrelenting in our goal to create a strong opposition bloc inside parliament and will run in one proportional list.

“McCain praised our determination and said democracy has to be achieved within the presence of true opposition.”

Mohamed Abul Ghar, head of the Egyptian Social Democratic Party, said McCain invited the NSF members to the meeting to update the American delegation on the current internal situation.

Abul Ghar said: “We expressed our concerns with the deteriorating economic situation in the country and McCain said they will monitor the situation.”

The US delegation arrived in Cairo Tuesday for a three-day-visit, which started with meetings with Prime Minister Hesham Qandil and Minister of Defence Abdel Fattah Al-Sisi.

Last November, McCain called upon US President Obama to hold back financial assistance to Egypt unless Morsy responded to the opposition demands.

McCain said in an interview with Fox News after Morsy’s 22 November constitutional declaration:”This is not what the United States and American taxpayers expect and our dollars will be directly related to the progress towards democracy, which you promised the people of Egypt, when your party and you were elected president.”

McCain said on Wednesday: “There is a need for an additional $489m of assistance to Egypt.” He added that the delegation support this and are “contacting [their] colleagues in the congress with hope that approval will be forthcoming.”

The delegation also met with members of the Syrian opposition coalition, whose headquarters are now in Cairo. McCain said that they were disappointed to hear that humanitarian aid for the Syrian people had not been delivered.

McCain asserted that he disagrees with the current US administration’s policy on Syria. He said “60, 000 people dying and hundreds of thousands wounded is a disgrace and America should be ashamed that it hasn’t done more.”