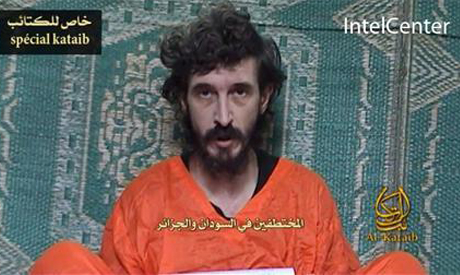 Nairobi (AFP) – Somali Islamists said Wednesday they would execute a French agent they have held since 2009, as France said the hostage was likely killed in a failed rescue attempt.

French commandos on Saturday launched a raid to free the hostage, known by the pseudonym of Denis Allex, but the rescue bid failed and resulted in the death of two French soldiers.

The Al-Qaeda linked Shebab said in a statement they have “reached a unanimous decision to execute the French intelligence officer, Denis Allex.”

A senior Shebab official confirmed to AFP on Wednesday that Allex “has been sentenced and this judgment will not be changed. As far as we are concerned this man should die.”

Neither the statement nor the official explicitly said Allex was still alive.

The Shebab justified their decision by saying they wanted to avenge “the dozens of Muslim civilians senselessly killed by the French forces during the operation.”

Witnesses said eight civilians died during the operation at Bulomarer, a town south of Mogadishu still in the control of the Shebab.

The group also cited “France’s increasing persecution of Muslims around the world, its oppressive anti-Islam policies at home, French military operations in … Afghanistan and, most recently, in Mali.”

The Shebab have not provided any proof that Allex is still alive.

The French army on Wednesday accused the Shebab of “manipulating the media” and reaffirmed that Allex is likely already dead.

“We suspect, and I believe that we are not wrong to do so, that Somalia’s Shebab are manipulating the media,” France’s Chief of Defence Staff Admiral Edouard Guillaud said on Europe 1 radio.

“We have no element since the raid indicating Denis Allex is alive. We think he is most likely dead,” he said.

In the operation to free Allex, two other French soldiers were killed. The French retrieved one of the bodies. Pictures of the second soldier, presented by the Shebab as the commander of the raid, have been posted on the Islamists’ Twitter account.

French Defence Minister Jean-Yves Le Drian said Saturday that the raid, by the elite DGSE secret service, was sparked by the “intransigence of the terrorists who have refused to negotiate for three and a half years and were holding Denis Allex in inhuman conditions.”

The minister said at the weekend that a French soldier was missing, but on Monday he said it now appeared that the soldier had died. He did not indicate that he was a commander. Le Drian said 17 guerrillas were killed in the raid.

Sources in Somalia said one of the reasons the raid failed was that the rebels had received advance warning, which senior Shebab commander Sheikh Mohamed Ibrahim confirmed to AFP by telephone without giving further details.

Le Drian’s explanation was that French troops had underestimated the Islamist rebels’ strength when they launched the operation involving some 50 troops and at least five helicopters — and some help from Washington.

President Barack Obama has acknowledged that US forces provided limited technical support for the operation, but said they had played no role in the fighting.

Denis Allex is the longest held French hostage overseas since French-Colombian Ingrid Betancourt, who had been held for more than six years by Colombian guerrillas until being rescued by Colombia’s security forces in 2008.