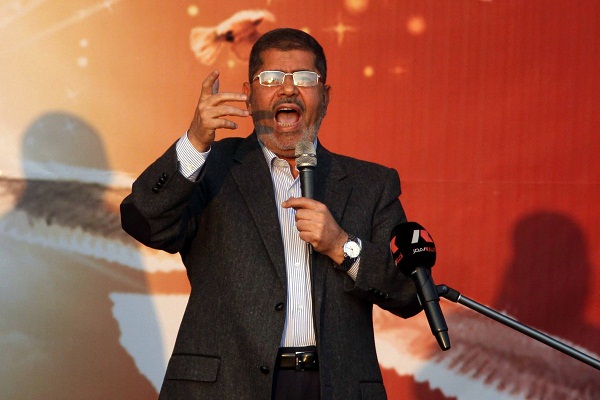 AFP – The United States on Tuesday condemned vitriolic anti-Semitic remarks attributed to Egypt’s Islamist President Mohamed Morsy before he was elected, and urged him to clarify his views.

According to a TV clip released by the Middle East Media Research Institute (MEMRI), Morsy refers in a 2010 interview to “occupiers of Palestine” as “blood suckers and war mongers, and descendants of pigs and apes.”

“We must resist them with all forms of resistance. A military resistance in Palestine against these Zionist criminals assaulting the land of Palestine and Palestinians,” he says in the remarks to Quds Channel three years ago.

He also denounces Middle East peace talks saying “the Palestinian Authority was created by the Zionists and American enemies for the sole purpose of opposing the will of the Palestinian people,” according to a translation from the Washington-based MEMRI.

Morsy, who was a leader of Egypt’s Muslim Brotherhood, came to power last year as the Arab nation’s first democratically-elected president.

His election, and a later apparent power grab which he then reversed under pressure, has raised eyebrows in the West, which is fearful his rise could signal a political shift in the country which has been a cornerstone of regional peace.

Nuland said Washington had already raised its concerns about the television clip with Cairo, and stressed again that Congress, which has blocked part of $1 billion in extra US aid, was watching the new Egyptian leadership carefully.

“We completely reject these statements, as we do any language that espouses religious hatred. This kind of rhetoric has been used in this region for far too long,” she told journalists. “It’s counter to the goals of peace.”

“President Morsy should make clear that he respects people of all faiths and that this type of rhetoric is not acceptable or productive in a democratic Egypt,” added White House spokesman Jay Carney.

The two administration officials stressed, however, that since coming to office, Morsy had reaffirmed Egypt’s commitment to the 1979 peace treaty with Israel.

He had done so “in both word and deed, and has proven willing to work with us toward shared objectives, including a cease-fire during the crisis in Gaza last year,” Carney said.

Washington would judge Morsy by both what he says and what he does, Nuland added.

“What he has been doing is supporting that peace treaty, continuing to work with us and with Israel on common goals, including in Gaza. But we’ll also judge him by what he says.”

According to a further clip seen by the New York Times, Morsy earlier in 2010 addressed a rally in which he urged Egyptians to “nurse our children and our grandchildren on hatred” for Jews.