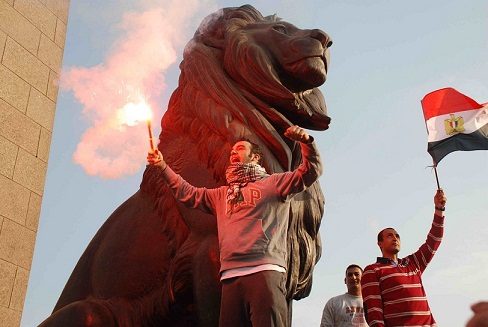 On the second anniversary of the 25 January Revolution, several political groups called for protests against Muslim Brotherhood control over the state.

“No to the Brotherhood state… the revolution will continue” is the slogan chosen by political groups for the upcoming 25 January protests.

Four marches, each supporting a separate revolutionary ideal, will converge at Tahrir Square on Friday. The first one, calls for social justice and will gather in Shubra.

The second will march from Imbaba and join forces with a march from Mustafa Mahmoud denouncing “the constitution of tyranny and high prices.”

The march from Al-Fath mosque demands a just legal system as the basis of the state and will stop at the High Court Building before heading to Tahrir.

“The last march will be from Maadi demanding freedom” said Ramy Sabry from the Popular Alliance Party at the press conference held by political groups on Sunday at the Press Syndicate.

Shady El-Ghazaly Harb, member of the steering committee of Al-Dostour Party said the protests will be peaceful,  “we welcome anyone who shares the same demands to join us, whether Islamists, liberals or any group.”

“All political paths are blocked, the revolutionary path is our only option” he added.

Harb also said that the Muslim Brotherhood controlled the cabinet and will control the parliamentary elections.

“I call on all revolutionary parties and groups not to participate in the upcoming elections; it’s based on an invalid constitution” Harb said.

Representatives of the Popular Current, the Revolutionary Socialists, Kefaya movement, 6 April Democratic Front, Egyptian Social Democratic Party and National Association for Change demanded accountability for the deaths of protesters during and since the revolution.

They accused the Brotherhood of allying with the Supreme Council of Armed Forces (SCAF) against the revolution.

“The Brotherhood allied with the SCAF and the old regime; they produced a constitution that would guarantee a military empire” said Haitham Mohameden from the Revolutionary Socialists.

The political groups also announced their support for the Ultras protests scheduled for 26 January.

The Ultras Ahlawy group are demanding retribution for those who died in the Port Said massacre.

The National Salvation Front media spokesperson Khaled Dawoud had said on television late on Saturday that the 25 January protests do not aim to oust President Morsy.

“We are asking him to fulfil the promises he made and to implement justice. We reject the Brotherhood control and the state of constitutional chaos we are living” Dawoud said.