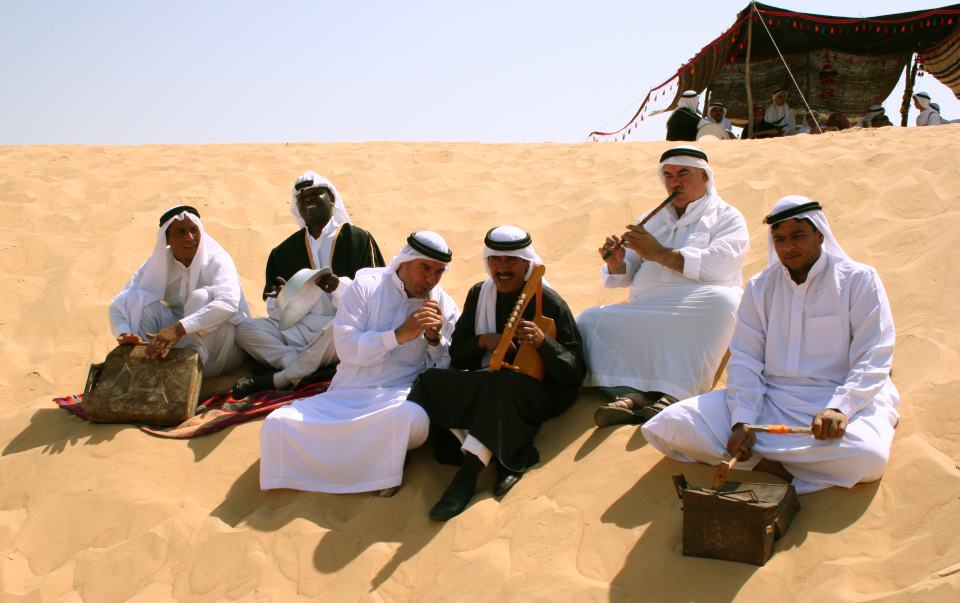 Egyptian folk music came close to disappearing a few years ago when fewer and fewer venues scheduled concerts and the number of young musicians learning to play the traditional instruments fell. Hoping to prevent the music from vanishing all together, Zakaria Ibrahim established El Mastaba which became the centre for numerous bands who perform Egyptian folk music.

Ibrahim founded his band El Tanbura 25 years ago in Port Said. They play a variety of traditional songs using local instruments like El Sememya, an old style of lyre.

El Mastaba was established in 2000 with the aim of documenting traditional Egyptian folk music. Said Ibrahim: “The centre has more than 300 hours of audio and video archival musical performances of our bands. We support folklore bands like Rango and El Nuba in many ways, either through marketing their work or by producing albums of their songs.”

Young people in Egypt are more concerned about politics since the revolution, resulting in a greater interest in Egyptian identity and in folk music. “Folk music focuses more on political and social issues; for example El Tanbura has performed many songs describing both historical and contemporary issues like the nationalisation of the Suez Canal and the Israeli invasion of Gaza in 2008,” Ibrahim said. El Tanbura preformed their Egyptian folksongs in Tahrir Square during the revolution which Ibrahim said inspired protesters.

Since the revolution the interest in national treasures like folk music has grown, as witnessed in the latest advertisement for one of Egypt’s mobile phone carriers. Two of El Mastaba’s bands performed in the ad; El Tanbura from Port Said and the Bedouin Jerry-can Band of Arish, which performs traditional music using the Bedouin semsemya and other instruments.

Ibrahim said foreigners also appreciate Egyptian folk music. “Europeans find something in our folk music that they have lost; collective creativity, because western civilisation is more based on individuality,” he said. The appreciation of Europeans for traditional Egyptian music is shown by their attendance at concerts.

Over the years El Mastaba’s bands have participated in many international music festivals around the world. The Rango, El Nuba and El Tanbura bands just returned from performances at the Womad (world of music, arts and dance) festival in the United Kingdom, where they won several awards.

Sufi music represents a respectable part of Egyptian cultural heritage and it is represented by El Mastaba as well. “Sufi music is not considered a religious art, but folkloric, and as long as its innovators and performers are part of the general population Sufi music cannot be separated from folk music,” Ibrahim said. The centre represents and supports the Sufi music band Darawish Abu El Gheit, which recently participated in a music festival in China.

El Mastaba does not receive government support because the bands that have made it their home are not registered by the Ministry of Culture.

Ibrahim is hopeful traditional Egyptian music will be around for a long time to come. “Progress does not mean we have to neglect our culture and heritage, but unfortunately we often believe that change means imitating western culture,” he said. “I believe the opposite to be true; we must find our own way which suits our traditions and is compatible with oriental culture.”