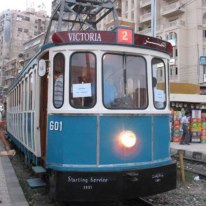 Two trams crashed on Wednesday morning in Alexandria, adding to a succession of road collisions.

A speeding tram crashed into another as it approached Victoria station, reported state-owned Al-Ahram.

A contributing factor in the collision was the busy nature of Victoria station, a tram hub.

The crash reportedly occurred in the women’s carriage, causing a state of panic among the passengers.

Political activist Hassan Mahrous said: “Passengers reacted to the crash with chants about joining Friday’s protests,” referring to protests scheduled to take place across the country on the second anniversary of the 25 January Revolution. He added that passengers were angry due to the rising number of traffic collisions occurring lately.

Two major train crashes occurred last week alone in Giza. The first took place on Monday at midnight, when a train carrying Central Security Conscripts derailed near Badrashein, killing 19 conscripts and injuring over 100. On Wednesday a taxi crashed into a moving train at Ard Al-Lewa; the four passengers in the taxi were killed.