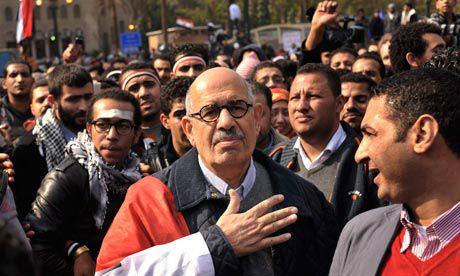 Opposition leader Mohamed ElBaradei has called on Egyptians to take to protest on 25 January to mark the second anniversary of the revolution.

He addressed the nation through a recorded video message on Thursday afternoon.

The head of opposition Al-Dostour Party said Egyptians should protest to show the revolution continues and that they will not stop until its goals are achieved.

“Yes, it will take time but we have to put ourselves on the right track. We have to see every poor person able to eat, every sick person able to get treatment, every child getting an education… all of this has to be achieved,” he said.

ElBaradei said among the reasons why people should protest is to demand unity among Egyptians and to demand a constitution that represents all Egyptians.

“I am going to protest to say I want free and fair elections. I want laws that will guarantee that all individuals from all sects will be represented in the elections,” he said.

Addressing the administration and the government, ElBaradei said: “I am protesting to tell you that you work for the people and the people are the one who will judge you through the ballot box and through other peaceful methods like protesting…. You have to understand that Egypt has changed….”

ElBaradei said the people will not stop protesting until they see credibility, transparency, social justice, freedom and dignity. “We want to see the Egypt that we all dream of,” he said.

On Wednesday night, ElBaradei handed running the party to Hossam Eissa who now heads the commission to facilitate the party’s work. ElBaradei remains the head of the party.

The party has been going through internal rifts exacerbated by the death of one of the founding members of the party.