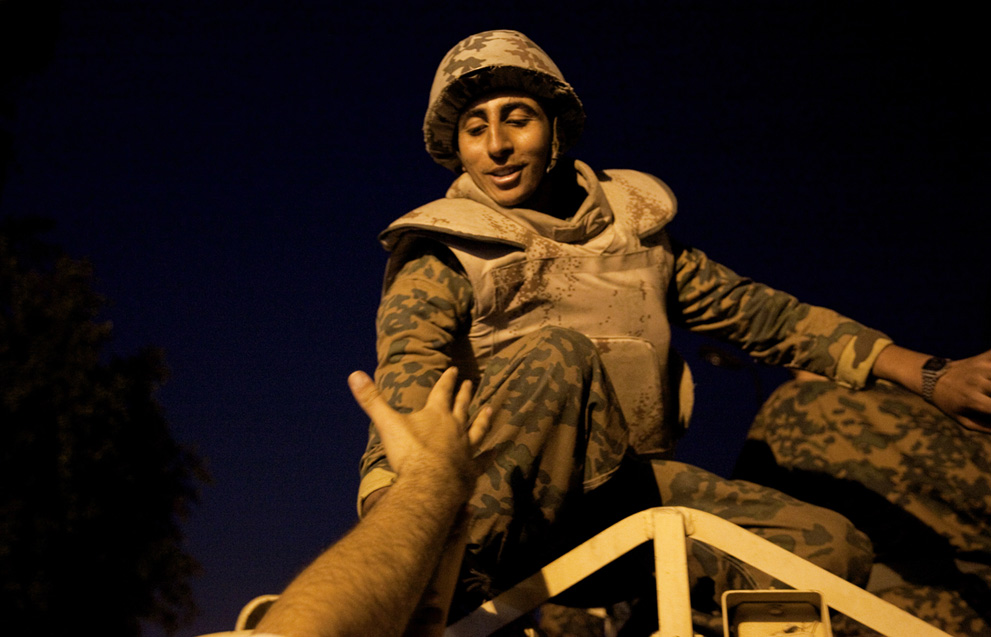 Years of police brutality and abuses culminated in the people striking back and strike back they did. On 28 January 2011, dubbed the “day of rage” pro-democracy protesters fought back against large waves of police conscripts and officers until security forces all but abandoned the streets.

In desperation former President Hosni Mubarak called on the military, respected and admired by most Egyptians, to deploy onto the streets and enforce security. Fearing the loss of public support, the military was hesitant to appear like it was supporting its supreme commander. At least in public.

During the latter days of the uprising pictures emerged of people handing flowers to the soldiers, other pictures showed soldiers helping to put up banners hailing them as the peacemakers of the revolution.

On 29 January 2011, Human Rights Watch (HRW) called on the army “to continue to exercise restraint in the face of legitimate protestors,” and warned that if live ammunition was used on protestors then those responsible could face prosecution.

At this point it appeared that the army were effectively spectators to the chaos that had unfolded around them. HRW reported that the army refused a request by citizens in Alexandria to protect them from looters, and were told “the army is overstretched and could do nothing for now.”

On 2 February 2011 the media beamed images around the world of the infamous Battle of the Camel; men riding horses and camels attacking anti-Mubarak protestors in Tahrir square. By the end of the day 11 people were killed and hundreds were injured. The army, who had control of who was allowed in to the square, did not attempt to put a stop to it.

Two days later HRW recommended that the United States and European Union tell Mubarak and military leaders that “the army’s actions on 2 February raised serious doubts about its willingness to protect pro-democracy protestors from violent attacks.”

On 10 February 2011 HRW claimed that since the army took control of the streets, “army officers and military police arbitrarily detained at least 119 people… and in at least five of these cases tortured them.”

One such case was that of Abdalla Kamal, who was beaten by soldiers and the military police.

Kamal, accompanied by his cousin and a friend had left Tahrir Square at 4pm on 1 February to get food. On their way back to the square they were confronted by a group of mechanics, whose business had suffered as a consequence of the demonstrations.

The mechanics asked for their identification cards, but only Kamal had his. “They started beating us, and this lasted for about half an hour.” He added, “at this point I thought I would be dead in a back alley.”

An older man came and stopped the beating and suggested that they be taken to the army.

They were taken to a building near the square, which the army had set up as a headquarters. “The army asked no questions, nobody asked why we were brought there. I think they had an agreement with the mechanics.

“When we entered the building we heard two girls screaming but we never saw them.” The trio were put with three other men, one arrested for taking photos, another for selling pharmaceutical drugs and the third was an older man accused of carrying explosives.

“They told us to strip off our clothes and lay on our front, so we did. They searched us and then tied us all together by our hand and our feet using ropes.” They were made to kneel and face the wall.

“Until this point we could hear the radio communication with orders being sent but then they stopped. They began to improvise.”

Kamal told of how a soldier would pass by randomly and kick them in the ribs. He said: “I couldn’t sleep on one side for three months because one soldier was very strong.

A captain appeared; Kamal knew by the stars on his shoulder. He was brandishing a whip. “He seemed lost, like he didn’t know what to do with it. In the end he decided to give us all one lash.”

A man in plain clothes then came to see them, and asked the soldiers what the charges against the prisoners were. They had none for Kamal and his companions. “Okay,” said the man, “bring them some knives.” Soldiers then placed knives next to them. They begged them not to do this, and eventually they agreed not to charge them for carrying knives.

All six of the prisoners were then transferred on foot to the Egyptian Museum. Kamal said they were marched past demonstrators from both sides, but they were not treated differently. “At this point the army were seen as neutral, so everybody thought we were guilty. They thought we were thugs.”

Kamal’s other cousin, the brother of one of his companions saw them just as they were being led in to the museum and began shouting, but it was useless. All of them were taken to the courtyard of the museum and they were hogtied. “I was lying on my front with my hands and feet raised behind me. I was paralysed.”

“He apologised for what had happened to us and told us there had been a misunderstanding.” He told them that they live in tough times and these things happen.

Kamal said that the man’s parting words were: “It is best for everyone if you do not tell this story.” Kamal added: “He made it sound like our national duty so that people didn’t lose faith in the army.”

Kamal discovered as they left the museum that his cousin on the outside had rallied the support of a large group of demonstrators, who threatened to storm the museum if they were not released.

“Before this happened I would come to and from the square. Afterwards I lived there.” A little time after this incident a picture emerged of Kamal and the other prisoners during their transfer to the museum. He said that the caption described them as “pro-Mubarak thugs”.

Kamal did not let this stop him from demonstrating against Mubarak and later against the police in Mohamed Mahmoud Street where he was shot in the leg by a live round.

The Committee to Protect Journalists (CPJ) said on 7 February 2011: “The military has become the predominant force detaining journalists and confiscating their equipment.” The CPJ reported that they had discovered “at least 140 attacks on journalists and news facilities since 30 January.”

CPJ listed a number of journalists, both Egyptian and foreign who had been detained by the military. The list included two prominent journalists from Al-Jazeera English, the New York Times and a former editorial staff member of Daily News Egypt.

The Supreme Council of the Armed Forces (SCAF) took control of the country following the resignation of Mubarak. On the surface they were portrayed as protectors; however this was not the case. The lack of intervention caused more harm to protestors than good and the numerous reports of abuse indicates that the army were more involved in persecuting protesters rather than protecting them.

Under SCAF’s reign hundreds more were killed and thousands injured either at the hands of the police, now under the military’s control, or directly by the military which used live ammunition and even tanks against civilians.