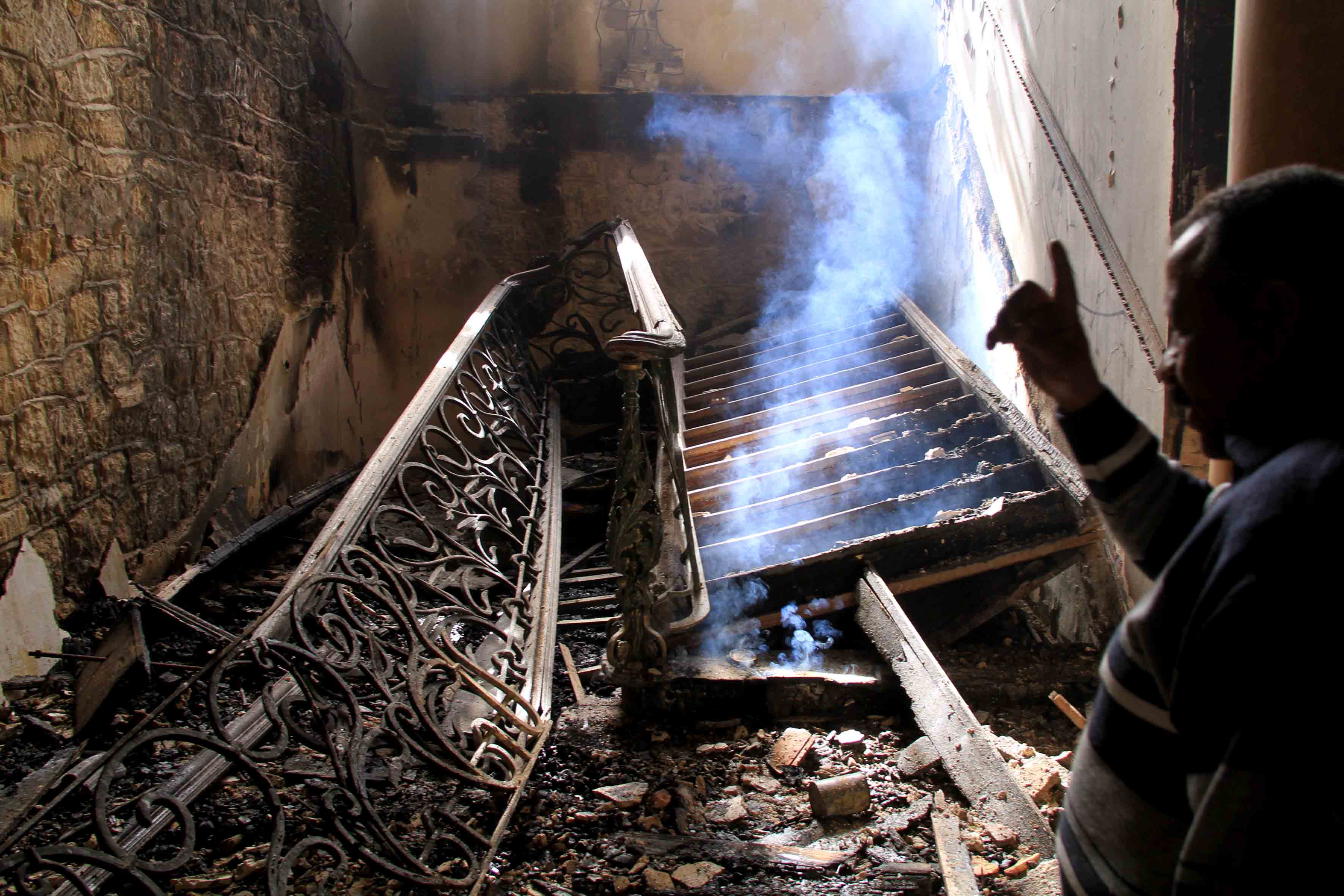 Gunfire and tear gas were used as clashes continued in Port Said on Sunday, raising the number of casualties to at least 34 dead and 416 injured; 17 suffered gunshot wounds.

The funeral processions of those who died in Saturday clashes turned violent when unknown assailants fired shots at the mourners.

Police responded with tear gas and mourners escaped to side streets. 3 people died in the clashes.

Shooting started as the funeral marched by the police club, according to Rawya Rageh Al-Jazeera English reporter in Port Said.

The police club and an army club next to it were set ablaze during the clashes along with the historic Jewish cemetery; they were all subjected to looting.

Clashes erupted around Manakh and Arab police stations as well.

Ahmed Khaled, one of the mourners, said nobody knew who was shooting: “We couldn’t bury the bodies amid the gunfire and people were suffocating on tear gas.”

Violence had erupted in Port Said on Saturday after the Criminal Court sentenced 21 defendants to death for involvement in the deaths of 74 football fans in the match between Al-Ahly and Al-Masry last February.

Over 70 defendants were being tried; the remaining sentences were postponed to 9 March. Relatives of the condemned prisoners tried to storm the prison to free them.

The army was deployed to restore calm and surrounded the prison with armored vehicles and tanks.

Funeral prayers started immediately after noon prayers and were followed by a procession to the cemetery.

The funeral was held at Mariam mosque despite noise from military helicopters that hovered overhead.

Mourners marching in the procession chanted against President Mohamed Morsy saying “leave” and “people demand the downfall of the regime.”

They also chanted “We will defend the martyrs with our blood and souls” and “we either redeem them or die like them.”

Ultras Green Eagles, fans of Al-Masry football club issued a statement on their Facebook page saying they will not allow any political activity in the city until the killing of Port Said youth in the clashes is investigated.

Suez is relatively calm after the army was deployed to secure the city after the death of nine protesters and one Central Security Forces’ conscript.

Major General Osama Askar, field commander of the third army in Suez said that all prisoners were transferred from police stations to Ataka police station.

A passerby suffered a gunshot wound and was taken to hospital.

Director of Security Adel Refaat revealed what happened during Friday clashes that took place in front of the Suez Governorate Building.

He said that security only used tear gas and refused to shoot at the protesters as they tried to storm the building, reported Hassan Ghoneima, DNE correspondent in Suez.

Approximately 300 security personnel secured the building and 85 of them were injured during the first hours of the clashes. Refaat asked the army for reinforcements and they provided 500 soldiers and 25 armoured vehicles to secure the Governorate Building and the Security Directorate.

He added that forensic reports proved the dead were shot from behind and at close range: “This proves security didn’t fire at protesters.”

The cost of local damage is estimated to be in the region of EGP 10m, and banks closed down on Sunday amid fears of looting.

The army called on residents of Suez to exercise self-control and protect public facilities.

In Damietta, an unidentified vehicle fired shots at the headquarters of the Freedom and Justice Party (FJP) in the Senaneya area on Sunday, causing panic among civilians.

The Muslim Brotherhood deployed members to secure its headquarters as well as those of the FJP, reported state news agency MENA.

The government administrative building has been under siege by protesters since Saturday night. Protesters announced that they will not end the siege until the revolution demands are realised.

Protesters have prevented employees from entering the building and hung a banner reading “The place is under our control.”

The building houses the directorates of health, housing, and finance as well the Central Auditing Authority and several social affairs departments.

In a related development, Hamdy Hawas, director of health in Damietta, has announced that the state of emergency in Damietta hospitals has been raised to the maximum level in preparation for the arrival of injured civilians from Port Said.

Hawas is carrying out his duties from the Damietta General Hospital due to the occupation of the government administrative building.

In Ismailia the Freedom and Justice Party (FJP) office on Talateeny Street was stormed and burnt on Friday during a massive march in the governorate. Security forces fired tear gas at protesters in an attempt to disperse them.

FJP claimed it has videos implicating security forces in starting the fire and planned to submit them to Egyptian prosecutors, whom have already begun investigations.

Another office belonging to the party was set aflame in Damanhour city of Beheira . A real estate taxes building in the same area was robbed before also being burnt.

Osama Soliman, secretary general of FJP in Beheira, claimed security forces were present at the time protesters broke into the office but did not take any action.

A similar scenario took place near Mahalla city council when protesters threw Molotov cocktails and rocks at the building. Security forces responded by firing tear gas into the crowds

The Black Bloc movement tried to break into Daqahleya governorate building. The masked protest group destroyed the main gate of the building and blocked the adjacent road, but security forces stopped were able to prevent anyone from breaking into the building.

In Tanta, hundreds of protesters attempted to break into Tanta courts complex on Saturday but were stopped by security forces. Ultras and Black Bloc members surrounded the complex, chanting slogans criticising Morsy and the Muslim Brotherhood.

The situation intensified when protesters started hurling rocks at security forces, which responded by firing tear gas into the crowds of protesters.

The incidents in different governorates followed Friday’s protests that marked the second anniversary of the 25 January Revolution.