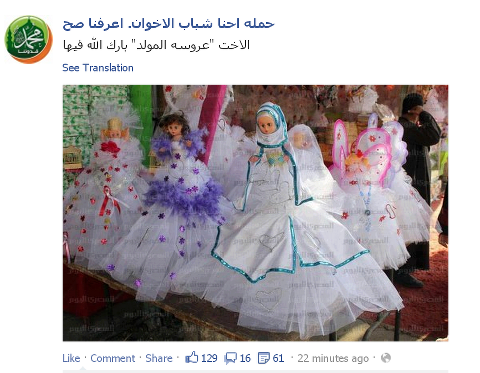 Though the Saudi religious establishment may consider it an “invention”, the Prophet’s birthday is celebrated by many Muslims and is a public holiday in countries like Egypt and Algeria.

Nevertheless, in Egypt, the celebrations are usually colourful and sometimes garish. There are always special kinds of candy associated with the holiday; Turkish delights that come in varied kinds and colours, nougat, coconut, semsemeya, fouleya and sudaneya. The last three treats are named after their sesame, dried bean and peanut bases respectively.

Traditionally, people buy dolls that are dressed elaborately in dresses of all shapes and colours to either liven up their homes or as gifts for girls. The traditional gift for boys associated with the holiday is a toy horse or a knight on a horse. Unsurprisingly, dolls are taken to reflect a certain conception of female beauty, as they do in many other societies; in other Arab markets, Fulla is a veiled version of Barbie that conveys different beauty standards to young girls, their main target audience.

The new doll was an immediate success in Egyptian markets but was the subject of much humour online. The change of dress was taken by some to indicate a shift in Egyptian culture to reflect more conservative values, aptly complimenting the current trends in Egypt.

The doll was widely available, along with the candy, in most areas in Cairo and in other cities across Egypt. The wide availability is testament to how popular the doll has become among Egyptians, particularly considering its recent arrival and recent relative obscurity.

One Twitter user sarcastically wondered, “Is it religiously allowed to buy a non-veiled doll for the Prophet’s birthday? What is the fatwa on this?” while another said, “Congratulations on the veil, here is hoping for the Niqab.”

Others said that the next step was for the doll to “stay at home”, as she retreats on a path of righteousness. The sarcastic tone may have provided entertainment for many, but for others the emergence of the doll created a bigger question: has Egyptian culture changed to the point where dolls are covered up to reflect it?

Some may be of the opinion that the doll’s veil or lack of is a non-issue. After all, the dolls are made to sell and what the public wants is what it gets. The veil may be an indicator of deep-rooted changes or merely a gimmick to sell more dolls. It may be a move to reflect a more diverse Egypt. In the end, to the little girls that received a doll for the holiday, it probably did not matter what the doll was wearing.

Al-Mawlid Al-Nabawi: a traditional celebration about to die?