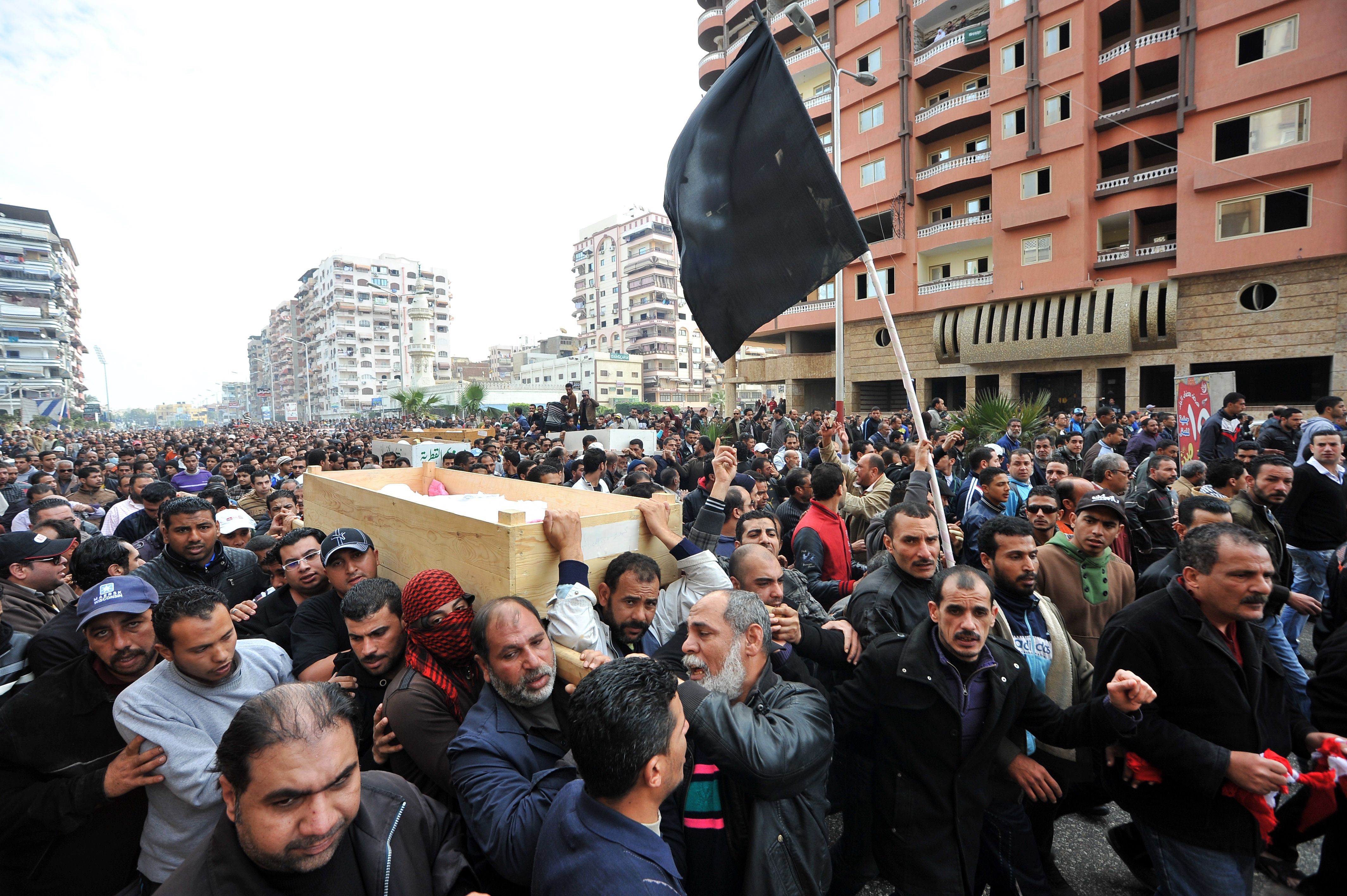 Funerals for those who died in Port Said on Saturday and Sunday were held on Monday afternoon.

After the noon prayer, the funeral processions of four of those who had died on Sunday were held. There were no reports of violence during the procession at noon.

In the afternoon, the funerals of eight of those who died on Saturday were held. They had died in Ismailia and their bodies reached Port Said on Monday.

Violent clashes erupted outside Al-Arab police station in the afternoon.

Several people died following clashes outside the same police station on Sunday. Mohamed Safa, a member of the Free Egyptians Party in Port Said said: “One was leaving the mosque that is near the police station, another was crossing the street…. they were all young….”

Safa had taken part in the funeral processions on Monday at noon. He said a police armoured vehicle kept following the mourners.

Safa had also taken part in the funeral processions that turned violent on Sunday. He was among a group carrying one of the coffins and was in the forefront of the procession.  The mourners were chanting, “there is no God but Allah. The martyr is Allah’s beloved.”

During the procession, police fired teargas at the mourners, Safa said. The mourners responded by throwing rocks at police and continued to proceed.

Safa said: “[The tear gas] was aimed directly at us. We were forced to throw the coffin and run.”

The Ministry of Interior released a statement on Sunday denying having fired teargas at mourners. It added in its statement that people set fire to a police facility.

Khaled Saeed a member of Al-Dostour Party in Port Said said: “Thugs have attacked police stations and fired at them but the reaction of the police is inappropriate. They are killing people.”

The violence erupted on Saturday after 21 defendants in the Port Said massacre trial were sentenced to death.

Over 70 defendants are on trial. The remaining defendants will be sentenced on 9 March.

Mohamed Eleiwa from Al-Dostour Party in Port Said said: “Since the first day, armed groups fired at police provoking them…. The police got hysterical and fired at people randomly.”

Eleiwa says among the groups are people known for their criminality in Port Said: “Any citizen in Port Said will tell you their names. Are the police too scared to catch them?”

Safa said snipers were stationed above the prison who were killing people about a kilometre away. Saeed said most of the people who died on the first day were killed by snipers from above the prison.

Violence across the country has left dozens dead, most of them in Port Said.