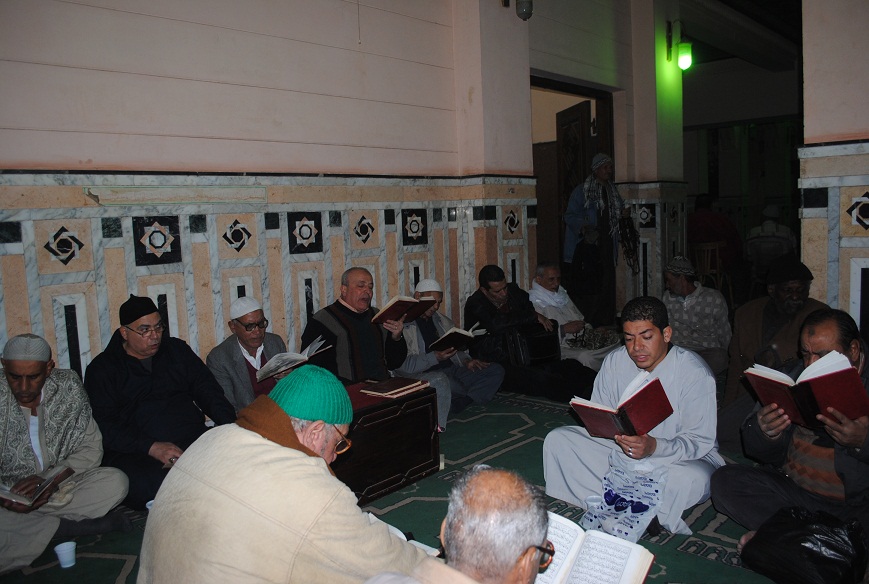 Among the many ancient and medieval tombs of Cairo, the huge white building of the Zein El-Abedien mosque looks like a haven in the midst of its dull, crumbling surroundings—a haven for the homeless and the poor that live in the area.

After the murder of his entire family in 680 CE during the battle of Karbala’ in Iraq, Zein El-Abedien, the great grandson of the Prophet Muhammad, escaped to Egypt, where he was warmly welcomed. Zein El-Abedien, whose name means “the best of all worshipers” in Arabic, called himself the son of nobles; for not only was his father, Imam Hussein, the beloved grandson of the Prophet Muhammad, also his mother was a Persian princess.

The Zein El-Abedien mosque named after him is beautifully lit with green bulbs, and the floors are covered with green carpets, giving worshippers the sense of being in a small sanctuary of purity and serenity in the middle of the hustle and bustle of the big city. The mosque has been recently renovated, but in a way, these renovations have obliterated its original, historical ornaments.

Every week a Hadra is held inside the mosque in front of the tomb of Zein El-Abedien. “He is not actually buried here,” said Solyman, the mosque’s imam. “The only relic the tomb contains is the head of his son Zayd.” That the tomb does not contain the body of Zein El-Abdien is not a problem, continues Solyman: “for he lived in Cairo, and his soul is everywhere.”

The Hadra is a collective Sufi practice that has been taking place in Egypt for hundreds of years. During the ceremony, Sufis chant rhyming Islamic verses in unison. Every Sufi order holds their own version of the Hadra; “but despite the differences in style from one order to another, our origins and intentions are one,” said Solyman.

During the Bayoumy Sufi order’s version of the Hadra, followers sit in two lines opposite each other and chant from the books of verses that are distributed among them. Women are welcome to attend a Hadra, but they are not allowed to chant or sit beside the men. When observing a Hadra, the reverence of all participants is obvious as they rock their bodies back and forth to the rhythm of the verses. Mamdouh Amin, one of the participants, said that his life will never go well unless he attends the Hadra every week. “It is the blessing of his highness Sheikh Zein,” he said.

Each Hadra has a leader who orchestrates the chanting and a courier who is responsible for distributing the books and sweets to all participants as an act of benevolence.

Some other Muslims, such as Salafis, claim that Sufi practices like the Hadra constitute something odd and irrelevant to Islam. “None of our verses, poems or our practices are inappropriate,” said Hamdy Farghally, the Hadra leader. “We all believe the same, and worship the same God whose forgiveness we seek.”

The mosque is considered a sanctuary for the poor and homeless, where free food and shelter are offered to all. In the week leading up to the Prophet’s birthday, an event known as as the Big Night, many people from all over Egypt were staying at the mosque, singing and chanting every night, in anticipation of this great event.

Egyptians are famous for their unmatched and unique devotion to the Prophet, his companions, descendants and the many Sufi Sheikhs. “They were greeted here in Egypt and received incomparable kindness and hospitality from us,” said Solyman. “More than 300 companions are buried in Egypt and we still seek their blessings and hold festivals in their memory every year, something we will never stop doing.”