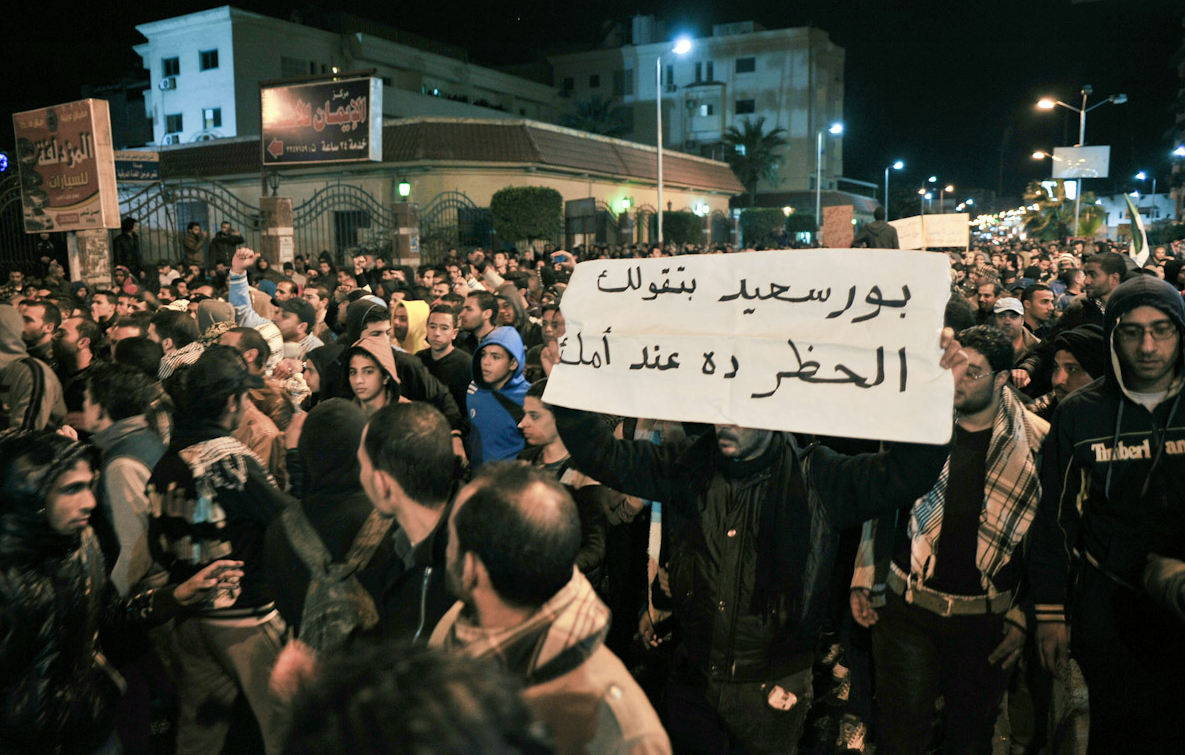 Egypt is gripped by nationwide protests for a sixth day, as Egyptians take to the streets in defiance of the emergency law imposed on the Suez Canal cities by President Mohamed Morsy. Aside from the two major flashpoints in Cairo and Port Said, large protests, marches have also taken place in Alexandria, Sharqiya, and Damanhour, where among other demands protesters have called for the president to step down.

In Alexandria, thousands of demonstrators blocked Abu-Qir Boulevard and the Sidi Gaber train station on Monday. Protesters at both sites called for the downfall of the current government and the lifting of the emergency state in the Suez Canal cities, blaming much of the current economic and political crisis on Morsy and his leadership.

The train services in and out of Alexandria were disrupted Monday night as a result of the protest, according to state-owned MENA. By Tuesday morning train schedules were restored to normal, but protesters threatened to stage another occupation later on Tuesday.

The Muslim Brotherhood in Alexandria meanwhile reiterated its support for peaceful demonstration, while labelling attacks on public institutions, clashes with police and the blocking of railways “acts of thuggery.”

In Sharqiya protesters surrounded the security directorate and demanded Morsy lift the state of emergency. The protesters also demanded the release of those detained over the past five days, threatening to escalate the situation if their demands were not met.

Several hundred people clashed with security forces in Damanhour Monday night, resulting in several as of yet unconfirmed injuries, but no fatalities. The Muslim Brotherhood and Freedom and Justice Party headquarters were stormed over the past few days, prompting the Brotherhood to file a case against members of Al-Dostour Party after they were allegedly found in possession of documents taken from the aforementioned headquarters.

A group known as the Free Police Officers group meanwhile released a brief statement in which they called on police officers across all governorates to hand over their weapons and vehicles to protesters or return them to the station. The group said they would not aid the Ministry of Interior or Morsy in suppressing peaceful protests. The group said they would protect police stations and other vital security buildings, but would not accept orders to beat protesters.

Due to the sensitive nature of the situation, the group declared they would not be speaking to media, nor would they be revealing themselves until such a time that it is appropriate for them to do so.