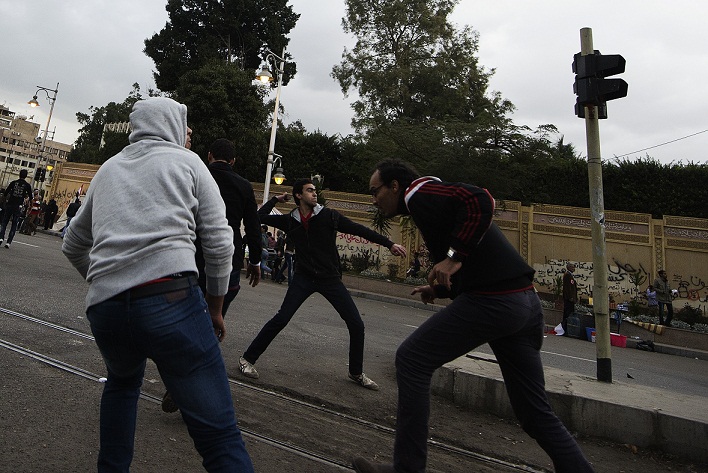 Clashes have renewed in the governorates of Kafr Al-Sheikh, Daqahleya and Sharqeya on Tuesday night.

Mahmoud Torky, a member of Al-Dostour Party in Kafr Al-Shiekh said the confrontation started when 50 people began protesting outside the building. People inhabiting the top of the building began throwing rocks at protesters, whom in turn called more people to join the protest.

There are injuries on both sides, Torky said.

Torky, who was present in Tuesday night’s protests, said he saw an armoured police vehicle attempt to drive over protesters on the side-walk.

Amgad Al-Naggar, a resident of Kafr Al-Sheikh said one of the protesters threw a Molotov cocktail at the vehicle to drive it away.

Al-Naggar said security forces were responsible for starting the clashes. “We would not start the clashes when we have women and children with us,” he said.

He added that many of the injuries were caused by suffocation form the teargas and that some people were injured in the head from the rocks being thrown at them by people situated above the governorate building.

“Our numbers are big and we are continuing,” Torky said, adding that another protest will be held on Friday.

Protesters also gathered outside the Governorate Building in Daqahleya on the same day. Security fired tear gas canisters at protesters. Noha Al-Sharqawy from Al-Dostour Party in Daqahliya, said: “These [protesters] do not belong to a political party. They are young men who scuffle with security.”

Prosecutors in Daqahleya were investigating 17 people on Tuesday for allegedly trying to break into the Governorate Building the night before.

Protesters in Daqahleya plan to hold a protest on Friday as well.

In Zaqaziq, 11 people were arrested after clashes erupted outside the Sharqeya Governorate Building on Tuesday. Security used tear gas while protesters threw rocks at police.

Mohamed Tawfik from Al-Dostour Party in Sharqeya said a group of people were referred to the prosecution on Wednesday. One person was reported injured in Zaqaziq.