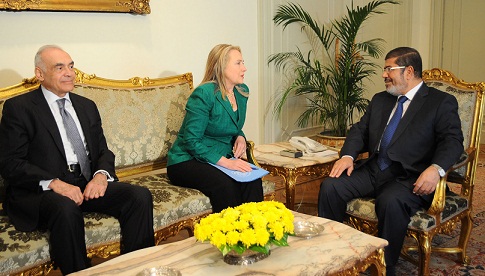 Outgoing United States Secretary of State Hillary Clinton gave her opinion on President Mohamed Morsy during an interview with Fox News, saying: “the jury’s out… it’s not what somebody says; it’s what they do.”

Clinton’s statements came days before the end of her term as US Secretary of State. The former US presidential candidate met with Morsy several times during her tenure, most notably when the pair managed to broker a ceasefire between Israel and Hamas.

In reference to the Arab Spring countries Clinton observed: “there was always going to be a period of adjustment.” She said that the US is working with international partners and Egyptians to make sure the revolution is not “hijacked by extremists… [and] not to see the return of dictatorial rule [and] the absence of the rule of law.”

She added: “it’s hard going from decades under one-party or one-man rule, as somebody said, waking up from a political coma and understanding democracy.”

On Morsy she said: “I think he has a lot of the right intentions.” She added that there are things that he has done which the US has approved of and other things it did not approve of, such as “abrogating a lot of power unto himself personally, reinstating emergency law provisions that had been a hallmark of the Mubarak regime.”

Clinton expressed that the issue of Egyptian border security is a big problem, specifically weapons smuggling. She said: “we need to reassert order in the Sinai. It’s in Egypt’s interest; it’s in Israel’s interest.” She highlighted the importance stopping Hamas from attacking Israel saying that this could have a negative impact upon Egypt if the situation becomes “uncontrollable.”

Clinton will step down from her role on Friday and will be replaced by Senator John Kerry whose appointment was approved by the US Senate on Tuesday in a landslide vote.