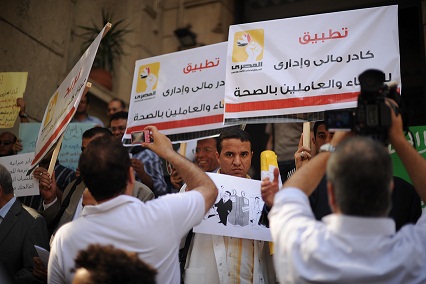 Representatives of Doctors’ Syndicates have met on Wednesday to discuss the controversial draft labour law which was among the top demands of the doctors’ strike.

Fou’ad said the country’s current state of affairs prevented many representatives to attend the meeting, but Cairo, Alexandria, and Minya and the General Syndicate were all well represented.

However, a top member of the Syndicate said the draft law they agreed upon was not the same draft law that was presented to the Shura Council, as it did not include changes previously agreed upon by the syndicate and Al-Wasat Party.

Doctors Without Borders denied that the draft was stolen by Al-Wasat Party and said the draft law was handed in by one of the thousands of doctors who participated in the strike.

Earlier in January, another draft labour law was published by the Ministry of Health on its website. “It was not presented to the Shura Council… We do not get the law,” said Fou’ad.

“It does not have the minister’s signature… So far it has not taken any official label,” he said. It stirred controversy during a press conference held on 5 January when verbal altercations broke out between doctors who were discussing it.

The labour law organises administrative, technical and financial matters for everyone who works in the field of medicine, not just doctors. The strike started on 1 October and was suspended on 21 December with the stipulation of passing the cadre law.