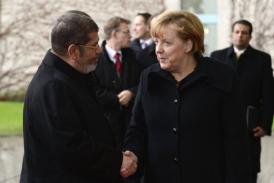 Morsy and Merckel discussed Egypt’s steps towards democratic progress, efforts to stop gunfire between Israel and Palestine, the country’s position against the Assad regime in Syria and the situation in Mali.

“This invitation shows that Germany is concerned about bolstering relations with Egypt. Egypt also cares for the same,” Morsy said in a press conference held in Berlin with Merckel. He repeatedly affirmed Egypt’s respect for its partnership with Germany and praised the nation for being one of the  European countries most supportive of the 25th January revolution.

Regarding the recent developments in Egypt, Morsy said he talked with Merckel about his intentions to continue with the establishment of all state institutions. “I am keen to hold parliamentary elections to form a parliament within the span of three to four months,” he said.

Speaking about Germany’s financial support to Egypt, Merckel highlighted during the presser that her country would like to see “guarantees of stability in Egypt first”. Germany is responsible for 25 per cent of the $5bn financial aid promised by the European Union to support the Egyptian economy.

Before the visit, the German foreign minister Guido Westerwelle said his country’s aid to Egypt is conditional to the country’s democratic progress. The assistance, he said, “depends on advances in the democratic development in Egypt…These last days we have seen some terrible pictures, images of violence and destruction.”

The minister stressed the importance of a dialogue between the government and the opposition and urged the international community to be “patient” in such critical time.

Morsy’s visit to Germany was initially scheduled to last two days, but presidential spokesperson Yasser Ali said it was shortened due to developments in Egypt. Two presidential aides as well as the Ministers of Planning and International Cooperation, Industry and Foreign Trade and Tourism have joined the president in his visit.

This is Morsy’s first trip to Germany since his elections in June 2012.

The state-owned news agency MENA reported that the aim of the visit is to enhance bilateral economic relations. Morsy is scheduled to meet with over 200 Egyptian-German businessmen to discuss bolstering business and investment.

Upon Morsy’s arrival, dozens of Egyptian expatriates have protested against him calling to end the widespread violence across the country, according to AFP.  Pictures of Egyptians standing in the rain have spread over Facebook showing protesters carrying banners that state “Morsy: stop the violence”.

Since Friday, more than 50 people were reported dead in clashes across several governorates, according to the official count.

Amnesty International has sent Merckel a letter asking her to call upon Morsy to order full investigation from the police and military on the violence used while dealing with the recent protests. The organization also requested from Merckel to ask the president to put an end for all the military trials on civilians. It demanded that Germany stop supplying Egypt with all sorts of small arms, ammunition and armored vehicles.