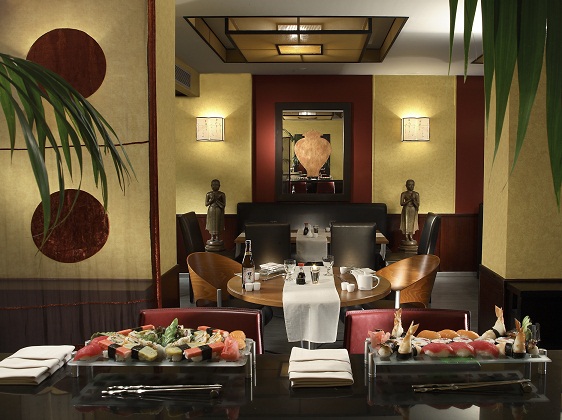 The Sonesta Hotel can be found in the ambiguous area between Nasr City and its older and richer cousin, Heliopolis. On the nice end of Tayaran Street (yes, there is shady end on the opposite side) the hotel is located at the intersection with Salah Salem, right across the tunnel.

The hotel is popular primarily for its convenient location near the airport; there are very few attractions around it, and both Nasr City and Heliopolis are largely residential areas.

While the hotel has all amenities one would expect from a five-star hotel, it lacks some of the lavish and luxurious elements of its counterparts along the Nile and most of the guests seemed to be sports teams and businessmen.

The Sushi Ya restaurant is located right next to the lobby. The restaurant’s interior looks great, and the small space manages to convey a sense of intimacy. Since the restaurant was completely empty when we arrived, there was no telling how the atmosphere would have been like had it been full, but we expected some of the charm might be compromised.

The menu was basic and clear, having a clean look that helped us to locate everything, though we opted for a platter of the chef’s choice and we were not disappointed.

The food was as fresh as could be, and the sushi was tasty. The chef covered his basics very well, but our reservations came when we were pressed to find a way to distinguish this sushi, good as it was, from other restaurants. We could only think of one word: generic.

Sushi Ya lacked inventiveness and failed to take any risks. While this paid off with some food items, it also hurt others. The hotel being located in one of the outermost neighbourhoods in Cairo, we wondered if someone would make such a trip for the food alone.

The intimate restaurant design also became a problem when a hotel employee began shouting and arguing with another employee in the lobby. Because the restaurant is open to the visible, it was like we had front row tickets.

One thing that makes me nervous in an empty restaurant is the waiter being overly attentive. Fortunately, the service at Sushi Ya was excellent and pleasant. The dessert was delicious and, ironically, more memorable than the sushi. We had vanilla ice cream with a delicious chocolate sauce made with a mystery ingredient the chef did not want to share.

Though the food was good and reasonably priced for a five-star hotel restaurant in Cairo, the sushi was not better than you could get somewhere else. If you live around the area or better yet if you are staying in the hotel, it is worth a visit.